Joe Haldeman - All My Sins Remembered 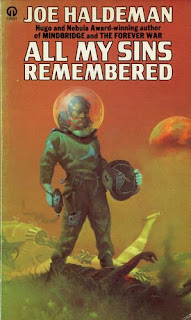 Joe Haldeman served two tours in Vietnam as a US combat engineer, where he was severely injured. It is probably fair to say that his experiences hang heavy over his novels, particularly Forever War which was rejected by numerous publishers in the 1970s, none of whom thought a science fiction retelling of Vietnam would sell. It did, and remains one of the most magnificent novels to come out of that war.

The title of All My Sins Remembered might be seen as an illusion to Hademan's own combat experiences. Certainly it is a book that deals with how extreme experiences can shape people and destroy them. The hero Otto McGavin is an operative for a shadowy organisation, the Confederación, that claims to keep the peace in the galaxy. Otto's speciality is that he can take on the personality and the body of others, allowing him to infiltrate enemies as a perfect spy. He comes to the Confederación a Buddist, firmly believing in the organisations' Charter that will protect the galaxy's inhabitants. The truth is much harsher. Agents are needed to investigate crimes, rob the innocent, fan the flames of rebellion or murder politicians and a host of other dirty tricks.

Through a series of connected short stories we follow Otto as he investigates the disappearances of some fellow agents, attempts to stop a interplanetary war and infiltrates a shady religious organisation that is attempting to find out a secret from an endangered alien species that can seemingly move planets at will.

It's not a complex novel, but its well and tightly written - there's more than a few contemporary science fiction authors who could learn from Haldeman's ability to describe the terrors of a alien jungle at night in a short few paragraphs. But Haldeman also manages to add into this an amusing tale of how a group of idealistic Communist settlers fell foul of the jungle's monsters and create a contempoary network of feudal states in cities around their stranded spacecraft.

Between each mission Otto is interviewed by his handlers, who are clearly growing concerned by his post traumatic stress. The ending is brutally abrupt, with a very subtle twist, and is an interesting metaphor for how states use and abuse their footsoldiers. Otto's idealistic hopes of serving the greater good of the galaxy are, of course, dashed. His organisation existed to serve itself, not anyone else. While hospitalised after a mission Otto muses to himself on becoming a cog in a machine: "You can posit and argue and posit and argue, but if the Confederación asked you to unplug yourself from that machine and die, you unplug yourself and die, if you could move your arms."