James Morrow - This is the Way the World Ends 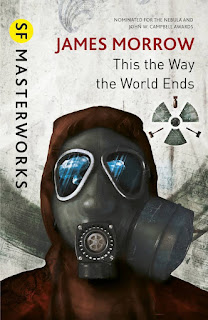 To what extent are those that do not speak out guilty when atrocities happen? This is one of the themes of this very funny, but extremely dark and bleak novel. George Paxman is an ordinary worker, a tombstone engraver, whose attempts to get a protective radiation suit for his daughter leads to him being charged with culpable guilt when humanity is destroyed by nuclear war. Alongside the generals and politicians whose only strategy to stop nuclear war was to build more weapons, George is put on trial by the ghosts of those who were never born.

First published in the 1980s this is a novel that is clearly influenced by the anti-nuclear war movements. The arguments for nuclear weapons are brilliant pastiches of the pro-war ideas that continue to be used to justify the bombing of other countries or the renewal of Trident nuclear submarines. Though the threat of nuclear war has retreated with the collapse of the USSR, the book feels surprisingly relevant to an era of seemingly unending war.

There are no happy endings here. Its nuclear war after all. It cannot end well. But the novel grips till its grim end, and the laughs are tinged with sadness. Justifiably republished as part of the SF Masterworks series, this is one of the best SF novels I've read.
Posted by Resolute Reader at 12:01 pm