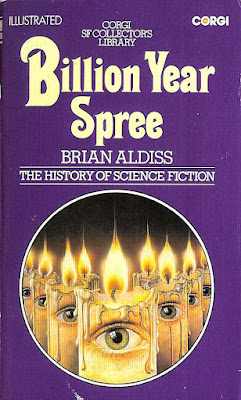 Brian Aldiss' Billion Year Spree was one of the first popular histories of science fiction written by a science fiction writer. It was later updated and renamed Trillion Year Spree, but due to a strange youthful compulsion to read all the Corgi SF Collector's Library editions I'm reviewing the earlier edition here.
Aldiss' begins his book with an original insight, crediting Mary Shelley as the first SF writer for her classic work Frankenstein. Unusual, and remarkably progressive, for the early 1970s when Aldiss first wrote this, the effect is slightly spoiled by the author failing to even give Mary Shelley her name in the introduction, referring to her only as the poet's wife. He recovers from this slip, and credits Frankenstein as being the first SF novel, defined in Aldiss words as "the search for a definition of man and his status in the universe which will stand in our advanced but confused state of knowledge (science) and s characteristically cast in the Gothic or post-Gothic mould." I remain unsure of the importance of the Gothic to the genre, but the "search for a definition of humanity" works well as a working definition of SF. It also gives Shelley her due credit.
Aldiss then takes us on a quick journey through early works of "SF" and their influences, including Poe, H.G. Wells and a number of Victorian fantasists. These summaries are interesting and insightful, though I often felt that Aldiss skirted interesting digressions. For instance nothing is mentioned of H.P. Lovecraft's racism which would surely have given an interesting context. Despite the inclusion of Mary Shelley early on, there are few references to female writers until the 20th century, and then with a few honourable exceptions (especially Ursula Le Guin) they are given only cursory reference.
I also felt that there wasn't enough due regard given to none European and North American writers. No mention of the Soviet Union's Arkady and Boris Strugatsky and only passing mention of Stanisław Lem. I would have liked an account of  Alexander Bogdanov though I do note it wasn't published in English until 1984. Part of the reason for highlighting these omissions is that the whole book feels dominated by a European narrative. Indeed Aldiss himself notes this when he points out that there are clear parallels in Victorian fiction and that of the early 20th century when travellers eye the world (or the universe) in distinctly colonial ways. John Carter's adventures on Mars being a classic example of this.
Which brings me to other omissions. I was disappointed that Aldiss failed to address wider social and political context. What about SF's discussions of questions like war, gender, sexuality, LGBT+ issues and so on? Books that talk about some of these issues are mentioned, but not the subjects themselves. Aldiss tends to see the 1960s in terms of music and culture, rather than rebellion and war. He also tends to focus on the big names - Heinlein, Asimov etc. Perhaps this is all made good in the updated version. As a result I found this book disappointing, though it's well written and relatively authoritative. It did leave me with plenty of "further reading" though.
Related Reviews

Mendlesohn - The Pleasant Profession of Robert A. Heinlein
Mitchison - Memoirs of a Spacewoman
Aldiss - Non-Stop
Aldiss - Greybeard
Posted by Resolute Reader at 5:05 pm

Email ThisBlogThis!Share to TwitterShare to FacebookShare to Pinterest
Labels: culture, SF and F