Minnie Vaid - Those Magnificent Women and their Flying Machines 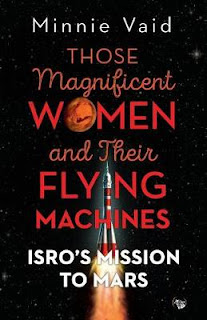 In September 2014 the Indian space programme successfully put a spacecraft in Mars orbit. It was an amazing achievement, and there were two principle reactions. Firstly the cost. Putting Mangalyaan in orbit was priced at $74 million USD. While this figure was far cheaper than a similar US mission there were those that argued it was too costly for a country with such levels of poverty. Defenders of the mission pointed out that the cost was less than the $100 million USD spent on the Gravity film staring George Clooney and Sandra Bullock. Few commentators also called for the Indian government to check its spending on weapons, or pointed out the high levels of poverty in the United States. Nonetheless the cost were enormous. But the scientific and technological benefits were demonstrated by the second response which was to celebrate the role of female engineers within the Indian programme and their centrality to the Mars mission.
Globally women "make up on 28.8 per cent of those employed in scientific research and development" and "there are only 12 per cent female members in sixty-nine science academies worldwide". Such gender disparities make the centrality of women to the Mangalyaan mission even more remarkable. Minnie Vaid's new book explores the paths those women took to reach their position, the roles that they play as scientists and the barriers they experience towards advancement. All the women interviewed clearly see themselves as crucial in terms of expanding the profile of women in science and encouraging young people, and particularly young women, to take up sciences.
Vaid notes the barriers. Women are expected to take up the "lion's share" of domestic work, bringing up children etc, and as a result "many women scientists limit themselves to less challenging positions, stopping short of jockeying for higher posts". There are hints at other barriers, including sexism and harassment at work and the prejudices of male workers and managers. Clearly however many barriers are being broken down, though I was struck how many of the women still took on the "double burden" at home of the lions share of domestic and childrearing work. That's not to say that their partners did not cook or care for children - far from it - but that their was a pressure on these women to be seen as good parents as well as brilliant scientists in a way that was clearly not true for their male counterparts.
There remains however, a long way to go. "There are two Indias" explains Vaid:

In the first we rank 131 out of 188 in the Human Development Index and 108 out of 144 in the Global Gender Gap Index. That is a women in India earns less than a quarter of the annual income earned by a man, while her share of unpaid household work and child care is 66 per cent - to the 12 per cent share of a man... in the second India, girls want to become space scientists, fly on a rocket to Mars and participate in human space programmes. In a recent survey... a whopping 70 per cent girls said they wanted to pursue higher studies and had a specific career in mind.

What struck me about many of the scientists quoted, and indeed their wider families, is that they frame their involvement in the programme in very nationalistic terms. It is notable, for instance, the pride with which the scientists are seen by within India. This is often directed in terms of taking India forward - several women interviewed remarked that wider family took on domestic and childcare tasks  for the good of the national space programme and India's national image. This celebration of the national achievement smacked of the nationalism around the US and Soviet space programmes and the "race" to beat the other, rather than a collective achievement. In the context of Modi's nationalistic politics it was notable that there was only one Muslim and one Christian female scientist interviewed. Also notable was that all the scientists clearly practiced their religion. This meant that while the book had some fascinating insights into wider Indian culture and politics, they aren't explored in great depth.
Nor were questions of gender equality explored further. It was interesting to see that several women had to, on occasion, bring young children to work - and this was facilitated by the organisation. It would have been interesting and exciting to hear that women were demanding free workplace creches and other reforms as a result. The women often worked extraordinarily long hours, with no extra pay, especially at times of launch or critical mission moments. I was disappointed to see that no one challenged these sacrifices and demanding more compensation - working in a prestigious institution should never mean allowing exploitation to go unchallenged - no matter how often managers make the tea. The fascinating insights into women in the Indian space programme posed many questions, but sadly the opportunity became mostly an opportunity to celebrate achievements rather than highlight further economic and political improvements that might be gained.
India's space programme is clearly going places and will be worth watching. This book offers a fascinating account of its most prominent aspect - the central role of women scientists. Readers will gain a new appreciation of the hard work and gains to be achieved from such science, but might feel that there could have been further exploration of the barriers and limitations.
Related Reviews
Burgess - The Greatest Adventure: A History of Human Space Exploration
Shetterly - Hidden Figures
Wolfe - The Right Stuff
First on the Moon - A Voyage with Neil Armstrong, Michael Collins, Edwin Aldrin
Posted by Resolute Reader at 2:28 pm