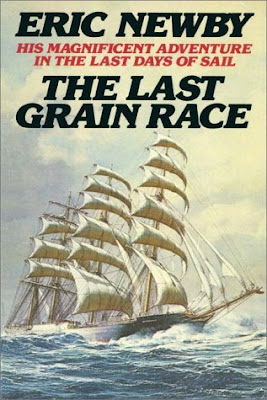 In 1938 the four-masted sailing ship Moshulu left Belfast to sail to Australia. Early the next year it returned home to England, its cargo holds full, the first of half a dozen ships racing in the Last Grain Race. For decades sailing ships had travelled between England and Australia, racing to bring their cargo home before anyone else to commander the best prices. But 1938/1939 would see the end of an era, as World War Two and oil powered cargo craft transformed the terrain of trade on the sea.

Moshulu's voyage would now be a footnote in the history of capitalist trade had it not been that one of its crew was the 18 year old Eric Newby, who would go on to have a famous career as a author and travel-writer. Nearly twenty years later Newby reconstructed the voyage from his diary and photographs and the result is this classic book.

Newby arrives on board the ship a complete newbee. His knowledge of sailing is limited to the exaggerated stories told to him by family friends and novels. The bullying mate sends him to the very top of the main mast on his first day onboard in Belfast docks to test his capability. Newby survives, but the experience at the dock side is very different to the reality he'll experience 20 metres in the sky during a gale.

The next challenge is the crew. The sailors mostly hail from Sweden and Finland, bitter rivals and the atmosphere of the 1930s is dominated by nationalistic sentiment. The crew argue, fight and drink together, though they're all committed to the voyage. Newby has to prove himself - as a drinker, as a fighter as a seaman before he is accepted by the majority of the others. Some of them never to accept this "Englander", though they all seem to tolerate him - not least because they can get the youngest to do the dirty jobs.

Life above decks is often dangerous. Below decks is dangerous, dirty and violent. The sailors are obsessed with food, food which is barely edible on occasion. The bedbugs, dirt and smells combine to make Newby regret his life choices. And yet, as with any group of workers in difficult conditions, relying on each other in perilous circumstances, the sailors knit together as their collective experiences solidify them into a crew that Newby himself is part of. By the return trip Newby is better prepared, experienced and almost as tough as the others. Leaving the ship in England is a poignant moment. He won't return - the outbreak of war sees to that. But he will never forget the experience. This classic of social history is much more than the "true adventure" story it is now marketed as, its a funny and insightful account of the hardships of those who crewed sailing ships - very badly paid for a very dangerous job.

Posted by Resolute Reader at 5:33 pm