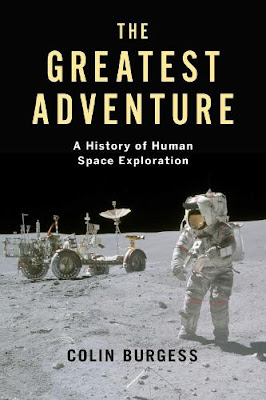 I was looking forward to Colin Burgess' The Greatest Adventure, because of the subtitled focus on "human space exploration". I was hoping that the book would look at the development of space travel while also examining how humans have learnt to live in space, cope with the mental and physical impact of space travel and how that might continue in the future. Unfortunately I was disappointed. The book is mostly a history of the different missions that the US and Soviet Union made during the "space race" followed by shorter chapters bringing the book up to date with the Space Shuttle, ISS, and brief mentions of the Indian and Chinese space programmes. Finally there is an all too brief account of private space companies, which doesn't do the discussion of the role of billionaires in space justice.

Oddly, given the title, there are some notable omissions. The rivalry between fixed wing and rocket strategies to explore space in the early US space programme is given cursory mention and Burgess doesn't even mention a figure as unique and important as Chuck Yeager. More importantly there is no real attempt to explore how social questions impacted on the human angle of the space programme. Burgess mentions Valentina Tereshkova, the first woman in space, but doesn't explore why it was a further 19 years before Svetlana Savitskaya followed her. Sally Ride the first US woman in space didn't fly on the shuttle until a year after Savitskaya. Why this aversion to women in space from the space programmes? What other problems related to gender and sex discrimination did female astronauts experience? Indeed, why did Sally Ride have to hide her sexuality for 30 years? It would have been an interesting exploration of the human side of space exploration if Burgess had tried to investigate the way that space exploration seems so closely linked with macho male, and usually military, figures.

Similar points might be made about black astronauts. The first black American astronaut, Guion Bluford,  didn't go into space until 1983. At least Bluford gets a passing mention in Burgess book, which is more than can be said for Ed Dwight the first black American selected for the early US Air Force training programme for astronauts. Dwight, a test pilot, was selected in 1961 but was not selected by NASA to be an astronaut and resigned in 1966. Dwight said he was driven out by "racial politics". Surely a discussion of why the Kennedy Administration wanted a black astronaut and why he might not of been selected would have been an essential contribution to a book about the "human" side of space exploration.

The 2016 film Hidden Figures based on Margot Lee Shetterly's book, rescued the hidden history of the role of black, female, American mathematicians in calculating trajectories and orbits for the US space-programme. Yet the contribution of these women, and thousands of other men and women who supported the programme, built the rockets, made the equipment warrants no mention at all from Burgess, though at least every returning Apollo astronaut understood this. Writing a history of the "human" space programme surely should at least acknowledge that the few hundred people who have been to space do so because of the work of hundreds of thousands of others.

A more mundane, but nonetheless crucial aspect of human space flight is the physical aspect. Returning astronauts frequently joke that the question they are most often asked by school children is "how do you go to the toilet in space?". Such basic, human, aspects to space exploration are absent from Burgess book and in discussing them Burgess could have opened up wider debates about the links between society, people and space. It would have been nice to include the illuminating story of Sally Ride being asked by NASA engineers if 100 tampons would be enough for a week in space.

Inevitably, given the differences between the Soviet and US programmes, there is more of a focus on US missions. Burgess does at least explore a little about how the Russian programme built international links by inviting foreign astronauts to join their missions, and later invite fee paying tourists on board.

The twelve astronauts who went to the moon, and the hundreds who have been in Earth orbit, found it a profound experience. It affected them in a myriad of different ways, and not all of the astronauts found it easy to deal with the fame and the emotional shock. Several early astronauts became alcoholics as a result. Some astronauts were penalised by NASA for taking things to space that they hoped to sell to supplement their meagre pay. Sadly, none of these interesting issues are discussed.

Space exploration is no different to any other aspect of society in that it carries with it the political and cultural divisions that capitalism creates. While it is impossible for Burgess to ignore the consequences of the imperialist rivalry between the Soviet Union and the US in creating the space race, there is almost nothing else in his book that discusses humanity and space beyond the most superficial. Instead the book is really a history of space missions, with the names of those onboard attached. Most disappointing.

Posted by Resolute Reader at 10:47 am