John McNeill - Something New Under the Sun: An Environmental history of the Twentieth Century 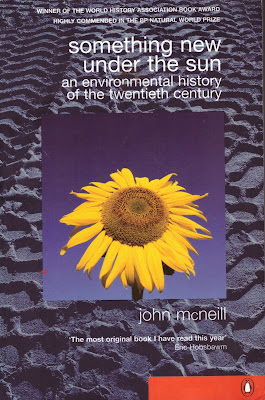 John McNeill begins his environmental history of the twentieth century by pointing out that environmental change is "as old as the planet itself", and that humans have always altered the world around us, but that "there has never been anything like the twentieth century". He is absolutely right. In the pages that follow he explores in detail how every aspect of the world's biosphere, from its atmosphere to the ocean depths saw massive change as a result of human activity through the last century. Unusually for an environmental history, he also considers things like urban sprawl, road building and other constructions that have also had an impact - not just the "natural" world.
The book describes well the environmental situation in the late 1990s. With a growth in ecological problems being stored up and growing concerns for the future. It is historically interesting to note that the author seemed far less concerned with climate change than we might expect. Even though the situation is far worse now than McNeill imagines, the book has a huge power to shock. There are appalling, and amazing, figures about how bad things were in the early 20th century, especially when discussing the shocking impact of deaths from air pollution and smog in cities.
However the flaw in McNeill's book is often his failure to explore how economic differences shaped changes. Take this passage about how soil erosion took place with the "frontier expansion of Europe [into the Americas] and the integration of world agricultural markets". McNeil says that "most of those who arrived in the Americas, "were peasants" from Northern Europe who had a specific approach to farming, incompatible with American soils that were not so resistant to erosion as those in Europe. He concludes, "had the conquerors and colonizers of the modern world come from a different environment, one that did not invite negligence of soil conservation, then this second pulse would have been faint".
But this is to ignore the context of European agriculture and how, and why, it was transposed to the Americas. What drives the 20th century's systematic soil erosion in the Americas was farming for profit, not the origin of the European settlers. Their practices might have initially been unsustainable, but the longer term problem was the reason for the agriculture itself.
While McNeill's book suffers from such approaches at times, he's not always this simplistic. A few pages later he writes about southern Africa where

accelerated soil erosion derived from a complex mix of social forces, not least the politics of settler societies. White settlement, culture and inappropriate technique played a role: plows and furrows invited erosion far more than cultivation by hoe had done. In Basutoland at least, successful missionaries converted Africans from their animist beliefs and inadvertently removed cultural constraints on tree cutting, promoting deforestation and erosion. Moreover, the incentives and pressures of cash cropping mattered.

This is a much clearer explanation, though I still feel it tends to downplay the economic in favour of a cultural explanation. Why did deforestation become needed - it wasn't a cultural requirement, it was an economic imperative.
McNeill lacks a clear framework on what drives ecological destruction in the twentieth century. On occasion he blames the economic system, or "a rogue mammal's economic activity". Often falls back on the old canard of population growth as the driving factor. Lacking a clear explanation that sites environmental damage in the context of economic production, and changing economic systems, he reaches odd, and unpleasant, conclusions. For instance:

death from air pollution and death from war, while ultimately perhaps equivalent, are from the social and economic point of view quite different matters. In the twentieth century, war killed people mainly in the prime of life; air pollution killed the sick, the elderly, and the very young. If one esteems all individuals equally, then the toll from air pollution may be reckoned as equivalent to the toll from the world wars. But if one considers instead that the elderly have already made what contribution to society they are likely to make, and that the very young - having had little invested in them - are very easily replaced, the calculus changes.

Of this shocking paragraph McNeill footnotes "I prefer the latter calculus intellectually, although I am offended by its heartlessness". McNeill tends to see economic activity more in terms of individual consumption: "When groups of consumers, through the magic of markets, were presented with the opportunity to buy something hitherto unavailable, they often did so." That said, McNeill does describe the way that economic integration (by which he means the attachment of ecologies to global markets) lead to the destruction of the environment and local communities. But he doesn't really explain why this happens.
More useful I think is the framework that Ian Angus has outlined in his book Facing the Anthropocene, which locates a "great acceleration" in ecological damage post World War Two, related to the way that US capitalism, dominated by fossil fuel interests enforced a particular economic model on the globe. McNeill's book fails to come close even though he describes the morbid consequences of the processes extremely well. What is missing from McNeill's book is any understanding of capitalism. He understands economic "activity" is a problem, especially the energy system, but without framing this within capitalism's drive to accumulate he pulls his punches and goes all over the place in his argument.
I suspect that if I had read Something New Under the Sun when it was first published in 2000, I would have found it more interesting and useful. In the light of the growth of left ecological writing since then it felt outdated. Nonetheless careful readers will material of interest even if the book is somewhat dated.
Related Reviews
Angus - Facing the Anthropocene: Fossil Capitalism and the crisis of the Earth System
Dawson - Extinction: A Radical History
Sparrow - Crimes Against Nature: Capitalism and Global Heating
Posted by Resolute Reader at 9:34 pm