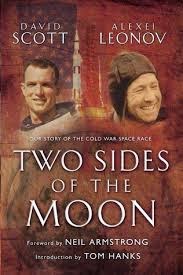 I was reading this book while watching the first launch of NASA's Orion spacecraft, a vehicle that many hope will return humans to the moon, mars and elsewhere. I'm skeptical that the political and economic interests exist in the United States for this to happen. In an era were private companies are expected to lead innovation in their pursuit of profit, I suspect that NASA's funding will dwindle. Orion may well prove to be a last hurrah.

The book is structured around the authors' lives. Each taking turns to tell parts of their story. Much of the fascination comes from the great differences between the two experiences, particularly their lives within their respective space programs. The Russian's were bedeviled by bureaucracy and lack of funding, which contrasts enormously with NASA's lavish initial support and a much more happy go lucky approach from the astronauts.

Leonov was a close friend of Yuri Gagarin, and their are some emotional parts to his tale, particularly in the aftermath of his friends death. He is also an accomplished painter and its notable that his accounts are often more concerned with his amazement with what he can see, while Scott's could be over-bearing in technical detail and much more matter-of-fact.

Scott was to go to the moon, and this is perhaps the highlight of the book. Forty years later and despite having seen the footage from the various Apollo missions countless times and read dozens of accounts and reports, the sheer fact that humans walked on the moon still has the capacity to stun me. Scott and James Irwin underwent extensive geological and scientific training for the lunar mission and their accounts are punctuated with genuine excitement at particular finds. Their ability to make decisions about exploration shaped by a wider understanding of geology. Something to bear in mind when discussing whether exploration should continue by robot or manned craft.

But these stories are immersed in the wider context of the space race. The confrontation between the United States and the Soviet Union. Scott is very partisan about the "benefits" of capitalism, over what is labelled communism. As he puts it when describing a discussion with a senator opposed to spending money on NASA, while at a meal with President Nixon,

"The unspoken political undercurrent to our discussion was the importance of the space programme in winning the Cold War. I did not say it directly to the senator grilling us, but underlying my thinking were very fundamental questions: 'Do you want us to win this race? Do you want to live in a free society? Or do you want to live under communism?'"

Scott's enthusiasm for science and exploration vanishes here, in the interests of simply winning an undeclared war with the Soviet Union. By contrast the parts of the book, particularly those by Leonov, which detail the interaction between Russian and US spacemen and the way that their shared experiences broke down barriers are illuminating. Leonov, for instance, bemoans how the ill-discipline of American astronauts missing breakfasts in the USSR meant he had to pay for the wasted food from his own pocket.

Leonov's is a victim of the collapse of the USSR. His encounters with senior politicians and figures in the USSR help expose the reality of that system and he undergoes his own political awakening. He never got to walk on the moon, though his spaceflights were important milestones. His tales, for instance of fighting off wolves while landing in Siberia, are a fascinating insight into the less well known side of the space race, as well as the tragedies. Those fascinated simply by space flight will enjoy the insights from both astronauts into the 1960s and 1970s space race.

But the book is damaged by being over-long and in places seems to drown in its own self-importance. Introductions by Neil Armstrong and Tom Hanks add little, and David Scott has added an extremely long list of acknowledgements which seems to include everyone he ever worked with. In part this is because the book is a defense of his actions in a number of run ins he had with NASA. But ultimately it all detracts from what is otherwise a readable book.
Posted by Resolute Reader at 9:44 pm