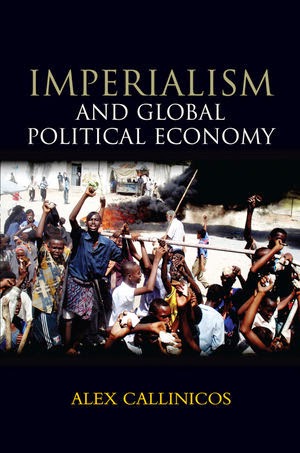 Reading Alex Callinicos' Imperialism as the West once again began to bomb Iraq for the third time and in the aftermath of a summer of Israeli assault on Palestine, I was struck by the clarity and importance of the Marxist analysis of Imperialism. In this book Callinicos traces the history of Imperialism, both as a political concept, and as a force that shaped, and continues to shape, the world we live in. Imperialism has had many meanings, frequently depending on the different historical societies that it is being used to describe. In the first chapter, Callinicos examines the particular imperialism of Empire - Ancient Rome for example - followed by the nature of military and economic competition in Feudal Europe. But this is very much a backdrop to a description of whole Imperialism under capitalism has become a qualitative and quantitatively difference force.


Economic competition we have already encountered as one of the two interconnected relations constitutive of capital. Geopolitical competition comprises the rivalries among states over security, territory, influence and the like.... The historical moment of capitalist imperialism is when the interstate rivalries become integrated into the larger processes of capital accumulation.

This understanding underpins much of Callinicos' argument. Imperialism is, as the classical Marxist analysis explains, a product of capitalism's economic development. It has, over time, taken different forms within capitalism that relate to the different political, social and economic circumstances. It is not enough to explain imperialism by "reducing the motivations behind public policy to direct economic interests" even though they are often crucial. Nor is it enough to see imperialism simply as the powerful states exploiting the weak. Callinicos quotes an excellent summary of this by Anthony Brewer,


It is easy to misunderstand the classical Marxist theories of imperialism since the very word has expanded and altered its meaning. Today the word 'imperialism' generally refers to the dominance of more developed over less developed countries. For classical Marxists it meant, primarily, rivalry between major capitalist countries, rivalry expressed in conflict over territory,m taking political and military as well as economic forms, and leading ultimately to inter-imperialist war. The dominance of stronger countries over weaker is certainly implicit in this conception, but the focus is one the struggle for dominance, a struggle between the strongest in which less developed countries figure primarily as passive battlegrounds, not as active participants.

Understanding how Imperialism has arisen under capitalism requires Callinicos to examine the historic development of capitalism, in particular the origins of the nation state. It was this part of the book that was perhaps the most challenging as it seemed the least directly relevant to the matter at hand. Callinicos discusses extensively the work of Marxists like Ellen Meskin Wood and Robert Brenner as well as other authors who have written about world history in various ways. But this section of the book turns out to be particularly important as it gives us the context for the modern nation state - the unevenness of historical development giving rise to uneven concentrations of capital. This is mirrored within capitalism itself. Capitalism itself requiring and causing further concentrations of capital while leaving under-development elsewhere. Lenin's five-fold definition of imperialism reflecting this reality,


(1). The concentration of production and capital has developed to such a high stage that it has created monopolies which play decisive role in economic life; (2) the merging of bank capital with industrial capital and the creation, on the basis of this 'finance capital', of a financial oligarchy; (3) the export of capital as opposed to the export of commodities acquires exceptional importance; (4) the formation of international monopolist capitalist associations which share the world among themselves, and (5) the territorial division of the world among the biggest capitalist powers is completed.

Locating imperialism as arising out of the very life of capitalism in this way, Callinicos is able, like Lenin and others historically, to comprehensibly demolish those who argue that there is a potential for a "ultra imperialism" which makes war impossible. As another great classical Marxist, Nikolai Bukharin pointed out "war is the central problem of the present day."

The mid-part of the book looks at the Marxist idea of the state in the context of Imperialism and the growth of capitalism, discussing the evolution of the state and the various rival analyses of its importance. I don't have time and space to review all of the extensive discussions here, but I was particularly struck by Callinicos' description of the state, not as a conspiracy of capitalists to exploit and oppress, but rather "to think in terms of state managers whose specific rules of reproduction endow them with certain interests - in particular, maintain and, if possible, expanding the internal and external power of the state."

Callinicos points to three key periods of imperialism, Classical Imperialism, from 1870 to 1945; Superpower Imperialism, 1954 - 1991 and Imperialism after the Cold War. In the contemporary era-the dominant imperialism of the United States continues to try to shape the world in its own interests. For instance, writing about Central and Eastern Europe, Callinicos notes


the historic achievement of the Clinton administration was to preserve the position of the US as the hegemonic power in Europe, in particular by linking the enlargement of the EU to that of NATO as an integrated process of extending the 'Euro-Atlantic' world deep into Eurasia.

This doesn't mean, as Callinicos goes on to point out, that there is no conflict of interest between the US and say, France or Germany, but it does mean that events in this crucial part of the world are very much linked to the interests of US capitalism. As an aside, it is this that is a key driving factor behind the ongoing crisis in Ukraine as sections of capital in that country see either the EU (and NATO) or Russia as being their best bet for advancement.


The combined impact of continuing slow growth in the core of the system and of a shifting global distribution of economic power is likely to create significant centrifugal pressures on the major blocs of capital that, it should never be forgotten, are in competition with each other. Maintaining both the political cohesion of the advanced capitalist world and US hegemony over it is not an automatic effect of a self-equilibrating system It requires a continue creative political effort on the part of the US, and ion particular the successful pursuit of divide and rule strategies at the western and eastern ends of the Eurasian landmass where the two zones of advanced capitalism outside North America are to be found.

The problem is that the world doesn't remain still. The US is aware that potential rivals exist and will grow, Russia, India or China for instance. This doesn't mean that war between these countries is inevitable. But the very nature of capitalism means that conflict and clashes are likely. Events in Ukraine are one example, as a proxy wars or economic clashes elsewhere. It also means that control over crucial economic and strategic regions, such as Iraq gain renewed importance as the US struggles to maintain its hegemony. A world that remains economical unstable can only make it harder for the US to control.

The World Wars of the 20th century had their roots in the capitalist system. The 21st century is a different place, but as Callinicos has ably shown in this book, the underlying faults and contradictions of the international capitalist system still mean that competition and crisis can easily become military confrontation. As we have seen in Afghanistan and Iraq this will mean suffering on an enormous scale for millions of people. The point is, as Alex Callinicos concludes, that understanding the system makes it easier for us to struggle for a different world. While this book doesn't discuss the mass movements that have historical arisen in response to war and imperialism, it should be read as a tool to develop those movements further. This book is a very important contribution to that understanding and should be read by radicals, socialists and anti-war activists everywhere.

Callinicos - Making History
Callinicos and Simons: The Great Strike: The Miners' Strike of 1984-5 and its Lessons
McGarr & Callinicos - Marxism and the Great French Revolution
Posted by Resolute Reader at 9:06 pm