Anne Alexander - 'Revolution is the Choice of the People': Crisis & Revolt in the Middle East & North Africa 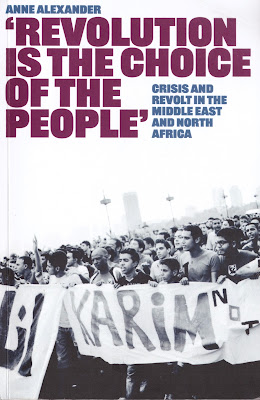 Anne Alexander has been analysing and writing on the Middle East and North Africa (MENA) for many years. As a socialist and trade unionist she has been instrumental in building solidarity with the revolutions that swept the region from 2011 and, more recently, with uprisings in Tunisia, Algeria and the Sudanese Revolution. As such she is uniquely placed to analyse the rebellions, and I've been looking forward to this book for some time.

'Revolution is the Choice of the People' is simultaneously a study of the underlying causes of rebellion in the MENA regions and a celebration of those revolutions. Some of the most inspiring sections are those were Alexander discusses the events of the revolutions, particularly that of Egypt in 2011. But this book is far more than a historical account. It is an unparalleled contemporary Marxist discussion of revolution in the modern world and deserves to be widely read by radicals.

Alexander summarises the importance of the revolutions:

The revolutionary wave which swept the Middle East in 2011 showed the potential for a region united horizontally through the ties of social class which connected the fates of the impoverished majority with each other and pitted them against the kings, generals and big businessmen who rule. It demonstrated the possibility of a future where ordinary people could liberate themselves from all kids of oppression, whether on grounds of gender or religious belief. This promise was both explicitly written into the demands of popular protests and strikes, which raised anti-sectarian slogans and implicit in the mass participation of women and oppressed religious groups.

She emphasises the role of the organised working class, showing that where they were central to revolutions in 2011, the revolutionary process went furthest. This is also true of the more recent "second wave" rebellions in countries like Algeria and Sudan where strike action has proved decisive at key points.

The revolutions of 2011 had contemporary triggers, but some of the most valuable sections of  Alexander's book are where she locates the revolutions in the context of the regions' history. Both the colonial past, and the imperialist present - which means that in addition to the impact of European colonialism, US and Soviet imperialism, Alexander also discusses the regional forces that shape economic and political context. Her sections on the role of Israel in the context of US Imperialism and how this shapes the Palestinian resistance are particularly insightful.

The more recent economic context centres on the "neoliberal turn" in the region, which say, she argues, a shift in the role of the state "towards a focus on its role as facilitation and organisation of capital accumulation and a relative reduction in direct production or provision of services". This helped create the conditions of revolt by undermining the support structures of the masses and forcing groups of workers into confrontation with the state and employers. The close links between the state, big business and the military in many countries helped this process - and framed the ruling class response to rebellion.

The direct impact of this is obvious in Egypt and Sudan where, following the initial successes of the revolution in removing dictators, the military quickly moved to position itself as a key part of the state in a "transitionary" period. In both countries the military waited to consolidate its position, before trying to enact a counter-revolution. In Egypt that process has been bloody success for the Generals, but in Sudan it has been partially blocked by the revolution - though as I write this the situation is in flux. Alexander underlines the "Faustian bargain between civilian opposition leaders and the military." She continues:

Despite the difference in their political ideologies, Islamists in Egypt and the heterogenous mixture of "technocrats", representatives of "traditional" Islamic Parties and reformist movements making up the civilian FFC [Forces, Freedom and Change] component of the Sudanese Transitional Government found themselves facing versions of the same problem. The generals had no intention of relinquishing their dominant role in the state.

The question of the State then becomes of supreme importance. Alexander explores how even radical reformist movements in the MENA region have failed to understand the role of the state and thus led movements into traps placed by the counter-revolutionaries. She shows how theories of change based on "non violence", including those argued by Western academics like Erica Chenoweth, fail in their aim of bringing democratic change because they do not aim to defeat the state machine.

Returning to the classical Marxist tradition Alexander shows how the ideas developed by Marx and Engels and then developed by Lenin, Trotsky and other revolutionaries, are directly applicable to the MENA revolutions. This is not to say that the ideas of those thinkers can simply be transferred without development. Alexander points out, for instance, that in the MENA region military institutions have "acted as direct agents of capital accumulation" with an enormous involvement of military officers in capitalist enterprises. She explains that this is distinct, but complementary to the "classic role played by military institutions in capitalist states as indirect agents of capital accumulation, as mapped out by Frederick Engels, Vladimir Lenin and Karl Liebknecht". A great strength of Alexander's book is how she develops classical Marxism to understand contemporary capitalism in the region.

In addition to her writing on the contemporary revolutionary struggle, there is much in this book of wider interest. In addition to the aforementioned sections on Palestine, the sections on Syria are also important, as part of a fascinating discussion about "workers' power". Alexander contrasts the different revolutions, showing how self-organisation of workers - organisation that poses the potential to become the basis for an alternative workers' state to the capitalist state - developed, or didn't develop. There were small beginnings of this process in Egypt, and the revolution in Sudan has thrown up thousands of Resistance Committees. In Syria the process was limited by the military response of the regime, which transformed the revolution into open warfare, as well as the self imposed limitations of areas which were often run through cross-class organisation, rather than being based on workers' control.

Here we return to the question of workers. In her discussion on neoliberalism, Alexander makes a point which is frequently forgotten. Neoliberalism is "still capitalism" and "capitalism needs workers". The fact that the MENA region has a huge and powerful working class meant that workers' revolt was always a possibility. The Egyptian revolution in particular went furthest in 2011 because its workers' had seen a succession of major revolts over the preceding decades that had created networks of activists who understood how to organise. The centrality of workers to capitalist production gives them enormous strategic power. As Alexander concludes:

As we have seen, the presence of organised workers engaged in mass strikes often proved decisive in shaking loose the grip of authoritarianism enough to open a period of political reforms or at least creating conditions for ordinary people to take some of their democratic rights to assemble and organise by storm. Conversely, the absence of the organised working class from the field of battle with the regimes generally correlated with the early militarisation of the counter-revolution and a rapid descent into civil war.

In too many cases, workers were used as a stage army to win concessions at particular moments of struggle. Instead, Marxists see workers' as the force for change, a force that can create the basis for a new state based on workers' control. Crucial to victory, however, will be the presence of organised revolutionaries. As Alexander shows, even small numbers of revolutionaries can make a difference. Yet their forces were too small to be decisive in 2011. Socialists in Sudan today are having similar arguments. This book is, in no small part, a contribution to developing socialist organisation today.

As I finished reading 'Revolution is the Choice of the People' rebellion exploded in Sri Lanka. Hundreds of thousands of impoverished working people stormed the presidential palace and overthrew the President. Even in the few days since it has become clear that the analysis that Alexander makes in her book is of crucial importance for millions of people around the world today. Capitalism can only offer economic crisis, ecological disaster and war. Anne Alexander's marvellous book is an inspirational look at how we have fought in the past, and how we can win today. Every socialist should read it.

Posted by Resolute Reader at 9:56 pm