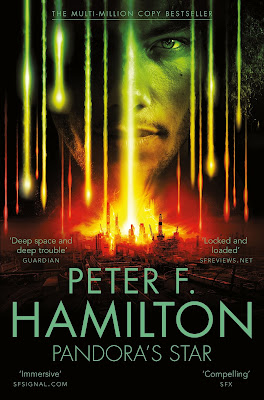 There really ought to be warnings on these books. 1144 pages long and it turns out it's only part one! Despite the disappointment at the lack of closure (I had hoped this would be a nice holiday read) I quite enjoyed Pandora's Star. The book is set in the Commonwealth, a centralised capitalist economy spread over dozens of stars, with Earth at its centre. The Commonwealth is linked by wormholes, and spaceships have pretty much become outdated technology, until an astronomer sees a double star wink out. The speed of the disappearance is unusual - as though the star has been turned off. It's enough of a mystery, and implies a highly developed technology unknown to the Commonwealth, that a spaceship is built to visit.

Turns out the stars have been enclosed in a massive force field. When it's penetrated humanity encounters a highly expansive and extremely dangerous alien race.

Most of the book deals with the build up to the arrival at the double stars and the interplay between various factions in the Commonwealth. There are various forces - the capitalists who want to protect their interests, the radicals who think that capitalism must be overthrown and there is a faction that believes there's an alien influencing humanity to open up Pandora's Star.

Most interesting, for this reader, were the revolutionaries. At least one of whom tells a brilliant story about how the capitalist food companies dump excess food into the wormholes to keep up the price. A story I've heard a few times in socialist meetings myself - though with the wormholes replaced by grain ships on the ocean.

It's all rather fun. But it is about 500 pages too long. Hamilton is given to extended descriptions of locations and a large number of minor characters, many of whom could have been dispensed with to make the novel tighter. Perhaps the target audience wants 1000 page blockbusters though. Hamilton can, however, do character development. I was struck by one character, Mellanie, who goes from being a minor character who is the sex interest of a major corporate boss, to being central to the plot at the end. He also writes decent female lead characters, even if there are slightly too many instances of sexy women using their sexuality to manipulate others. But Pandora's Star is cleverer than the average space opera, and I'll probably read the sequel for closure. Though I hear it is over 1200 pages!

Posted by Resolute Reader at 5:19 pm