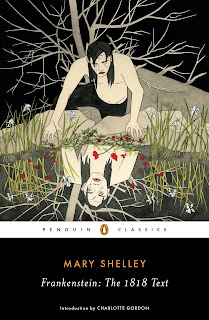 One of the things that becomes quickly very clear when reading Frankenstein for the first time, is that you aren't reading the book you thought you were going to be. Frankenstein has become such a cliche that you expect the monster to be a lumbering giant that is animated by a fancy electric apparatus, powered by lightening with a switch thrown by a maniac scientist. Mary Shelley's Frankenstein however is a much more subtle work that deals with big philosophical questions as well as shocking its reader with cruelty and violence.

Famously Shelley wrote the book after a late night discussion with her partner Percy Shelley, Lord Byron and his companion Polidori who came up with the idea of them all writing a ghost story. Although only Mary Shelley's story reached a book length publication, the Penguin edition I have also includes the few pages that Byron wrote and the longer (and quite effective) vampire story that Polidori produced. This latter in itself is fascinating for its insights into Byron, but need not detain us here.

Mary Shelley's Frankenstein is a remarkable work that poses a very big question. What is it to be human? Dr. Frankenstein who animates the "monster" (which is very distinctly not called Frankenstein - take that Hollywood) is a troubled genius. Arriving at university Frankenstein is inspired to break from his abstract philosophical thought and pursue a career in the natural sciences. Shelley starkly poses the rational sciences as being separate from the more abstract romantic ideas that her anti-hero has been dabbling with. Its not clear how Frankenstein makes his creation, but once life is breathed into the creature, its inventor runs away, terrified by what he has done. Devoid of friendship and lost in a strange world the creature gradually learns to speak and locate his creator. Shunned because of his looks, the creature begins a terrible revenge - not to simply destroy Frankenstein, but to break him by destroying everything that is dear to him.

The other thing that strikes me reading Frankenstein is how horrible Victor Frankenstein is. This scientist is not "mad" as the film suggests, rather obsessed with triumphing over natures laws to create life. To literally become God. When this backfires his remorse and fear overcome his own rationality and he retreats - his emotions taking over from logic. But on every occasion when he might have fixed things he backs down, interested in only himself. Its a theme that the creature also takes up. His eavesdropping leads him to an understanding of the real horror of society. Overhearing the conversations of a poor family the creature learns:


Every conversation of the cottagers now opened new wonders to me. While I listened to the instructions which Felix bestowed upon the Arabian, the strange system of human society was explained to me.  I heard of the division of property, of immense wealth and squalid poverty, of rank, descent, and noble blood.

Poverty is a great theme of Frankenstein. If the creation of Frankenstein's monster is an easy metaphor for the industrial revolution, it is a revolution that eats its own children through poverty and destruction. The creature, shunned by humanity and his creator, wants to run away to his own idyll, with a second female creature created by Frankenstein. When Frankenstein refuses the scene is set for mutual destruction. Mary Shelley's background in radical politics and the left-wing, radical, milleui that she wrote the book in is apparent on every page. If this is a ghost story, the real horror is the real world.

Told through letters, recollections and flashback this is not an easy read. The story is filled out, in the manor of Victorian novels, with vast amounts of scene-setting information. But this is a fascinating and very enjoyable read - just not necessarily the one you were expecting.
Posted by Resolute Reader at 8:34 pm