Mike Gonzalez & Houman Barekat - Arms and the People: Popular Movements and the Military from the Paris Commune to the Arab Spring 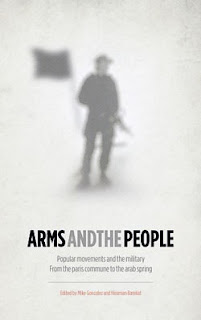 The classic Marxist account of the State is that it is the collective institutions within society that help ensure the continued position of the ruling class. Some of these are subtle - the laws, religious institutions, prisons and so on that seek to restrict and control peoples lives. Others of these are more physical, what Engels and Lenin describe as "armed bodies of men".

In Britain where I live, most progressive activists have experienced the behaviour of one "armed body" - the police. Less common for us is the role of the military. Though recent experiences during the Egyption Revolution has shown that this is not true everywhere. This new collection of essays is an attempt to draw out the experiences of the role of the military, in particular, the army during periods of social upheaval. In his introduction, Mike Gonzalez draws out the contradictory role of military forces using quotes from the German revolutionary Karl Leibknecht:

"[Modern Militarism] wants neither more nor less than the squaring of the circle; it arms the people against the people itself; it is insolent enough to force the workers ... to become oppressors, enemies and murderers of their own class comrades and friends, of their parents, brothers, sisters and children, murderers of their own past and future. It wants to be at the same time democratic and despotic, enlightened and machine-like, to serve the nation and at the same time to be its enemy."

In order to do this those who make up the army have to be changed;

"First of all, the proletarian in uniform is sharply and ruthlessly cut off from his class comrades and his family. This is done by taking him away from his home, which is systematically done in Germany, and especially by shutting him up in barracks. One might also speak of a repetition of the Jesuit method of education, a counterpart of monastic organisation."

Leibknecht understood however that under the pressure of social events the "proletarians in uniform" could be pulled away from the role assigned to them by the state and won to the interests of the working class. But this could only occur at moments when the working class was able to reach out to the army and fight for their loyalty. In a chapter on the experience of workers and the armed forces during the Portuguese revolution in 1974/5, a soldier describes what happens when he and his comrades are ordered to prevent a demonstration:

"the commander told us that he'd received a telephone call about a demonstration at Lisnave, led by a minority of Leftist agitators and that our job was to prevent it from taking place. We were armed as we had never been before with G3s and 4 magazines... The demo began and a human torrent advanced with shouts of "the soldiers are the sons of the workers", "tomorrow the soldiers will be workers" and "the arms of soldiers must not be turned against the workers". The commander soon saw that we weren't going to follow his orders, so he shut up. Our arms hung down by our side and some comrades were crying... The following day in the barracks things were livelier. Before morning assembly many comrades were up and shouting the slogans of the demo."

Many of the essays in this book explore this process. Some of the essays, like the two on the Russian and German Revolution demonstrate how mass conscript armies are both won towards the Revolution by the impact of the war, economic crisis and the reality of life in the trenches. But the soldiers (and sailors) are also part, at key points of driving the revolution forward. The masses, in the shape of the workers and their organisations, remain essential to winning the revolution, but the loyalty of the armed forces is crucial to ensuring the revolution isn't drowned in blood.

The book also looks at other aspects of the military and progressive change. One chapter - dealing with the Free Officers movements of Egypt and Iraq, explores the way that the military, or sections of the military have been at the front of struggles against colonial rule. In these situations the army tried to move independently but often found itself unleashing wider social forces, which then needed to be controlled.

Two excellent chapters, one looking at the limitations of Guerrilla movements within South America in the 1950s and 1960s, but more particularly Jonathan Neales' chapter on the experience of the US Army in Vietnam, examine the role of the wider population and its impact on the army. In South America with the exception of the unusual circumstances in Cuba, Guerrilla movements made little impact because they remained isolated from the wider population and their struggles for liberation. Conversely in Vietnam the overwhelming US military might was unable to sauced because their opponents were supported by the bulk of the population.

The role of the military is never an independent one. In fact, one of the mistakes of many of those who have tried to change society, is to think that the army stands outside of politics. In a brilliant chapter on Chile in 1973, Mike Gonzalez draws out the limitations of this reformist analysis as he examines the military coup that destroyed Salvador Allende's attempts at reform. As the right wing and the military prepared to drown the Allende government and the rising working class movement in blood, Gonzalez points out the "astonishing... blindness of the Popular Unity leadership to these realities." Indeed in order to try and appease the right, Allende went so far as to introduce three army generals to his cabinet, including Pinochet.

To the last, Chilean activists and foreign commentators spoke of "loyal" officers who would not fight their elected government. But unlike in Russia, Germany or Spain in 1936 (the subject of an excellent chapter by Andy Durgan) there was no pole to pull the mass of the soldiers away from their officers and the state. This, as Gonzalez points out, would have been "an organised, well prepared working class that could fight back across the country". Unfortunately, Allende and most of the left, including the Communist Party had prevented that force developing.

There are many lessons to be learnt from these valuable essays. I would make a couple of criticisms though these are mainly ones of omission rather than disagreement. The first is that there is no chapter on the Red Army. In the aftermath of the Russian Revolution Leon Trotsky built from scratch an army that was able to defeat the invading counter-revolutionary forces. That army, like Republican forces in Spain in 1936 had many different attributes to a normal capitalist force and it deserves more than a passing mention here. Secondly there is not enough in here about how revolutionary movements have won, or attempted to relate to soldiers. A recent, non-revolutionary, example might have been the Military Families Against the War campaign in the aftermath of the UK's participation in the attacks on Afghanistan and Iraq.

Of course there can be no blue-print for how revolutionary movements should relate to the armed forces. The key answer is that at any point of mass struggle institutions must be created that attempt to win those in the military who want to rebel, or break from their officers to "an embryonic alternative state power". In the Russian and German Revolutions those were the workers councils. In Spain it was the mass revolutionary movement that seized power in the cities. Ultimately it is on the question of power that revolutions are won or lost, and the failure to win the rank and file towards an alternative centre of power has doomed many a revolutionary upsurge. This book helps us learn that lesson today.
Posted by Resolute Reader at 9:13 pm