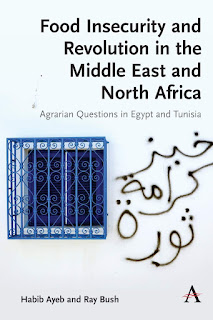 For revolutionary socialists the perhaps the most inspiring events of the last decade were the Revolutions that took place in the Middle East during the so-called Arab Spring of 2011. The term Arab Spring obscures a much more deep rooted and revolutionary process and books like Habib Ayeb and Ray Bush's recent publication are important because they explore the revolutionary dynamics at the core of these mass movements. Ayeb and Bush's book focuses on a key aspect of the struggles, but one that is often ignored - the role of the peasantry. They focus on events in the two key countries for the events - Egypt and Tunisia.

One of the central demands of the Egypt Revolution in January 2011 was the call for Bread Freedom and Social Justice. This echoed demands from Tunisia in December of the previous year. The authors argue that this shows the "issue of sustained access to affordable food" was at the centre of the revolutionary outbreaks. The slogan, "carried the rural and peasant signature of popular risings" and shows the "similar origins and progressions" of the revolutions in the two countries. Indeed Ayeb and Bush go further and argue that both revolutions had at their heart agrarian demands. The Tunisian revolution famously began when Mohamed Bouaziz self-immolated outside a police station following repeated harassment. This short description however masks how Bouaziz and his family had been activists in long standing social movements about land, food and the right to work and sell produce. These, and similar groups of activists also helped create the conditions were mass protests didn't just explode in response, but networks existed to drive the revolution forward.

Similarly in Egypt the authors argue that the roots of the other throw of Mubarak in 2011 lie much earlier - in particular in movements that arose in the early 1990s against the "counter-agrarian reform Law 96" which had a number of implications for peasants and small farmers, but most significantly it drove the dispossession of small-farmers from their land. While the movement was ultimately unsuccessful, it did leave a legacy. Ayeb and Bush explain:

It is significant that the persistence of rural struggles and networks for change in Egypt's countryside after the 1990s were more fluid than those centred in urban struggles. There emerged and important network of social resistance to state brutality that was orchestrated through the mis of security forces, police and military in the countryside.

They continue by detailing a history of rural struggle in the period between small-farmers and peasants against landowners and landlords, and security forces. The repression was significant, but not all powerful.

Rural locations were ripe for intimidation and violence, imprisonment and torture and harassment of the poor. But this did not prevent resistance, direct action and even the use of the courts to try and hold landlords to account and to at least slow the return of feudalism.

While I disagree with the use of the word "feudalism" here, it is important to acknowledge, as the authors do, that there was a significant history of agrarian class struggle that helped lay foundations for the events of 2010 and 2011 in Tunisia and Egypt.

In fact from the1970s onward both Tunisia and Egypt saw a sustained period of neoliberalism that systematically destroyed many rights and protections that peasant produced had. The authors detail how in Egypt, for instance, attempts to protect and encourage food self-sufficiency in Egypt had led to the Nasser government protecting and nationalising land. But through the 80s and 90s, both countries saw the dispossession of small producers on a huge scale, a transition to agriculture aimed at the export market and the destruction of farming that could feed the countries.

On the one hand, the state abandoned its social role in favour of the most disadvantaged strata and classes. On the other hand, the state mobilised all its means, especially financial, to serve the dominant economic and political groups. In agriculture this meant the end of support and subsidies for small farmers and peasant agriculture and the financial, fiscal and political support for agribusiness and capitalist agriculture oriented towards export.

Thus the agrarian policies of both Tunisian and Egyptian governments laid the basis for mass discontent. The focus of the authors on the forgotten recent history of the peasantry and small-farmers in the two countries fills a gap for those trying to understand the revolutionary process in the Middle East. However at times I did feel that because the authors focused on rural issues and the peasantry they ended up neglecting other forces in society. For instance the implications of the "War on Terror" and the Palestinian question as issues that drove discontent with Mubarak. Ayeb and Bush mention, for instance, the strikes in Mahalla, but only in passing yet these struggles and others are closely linked to wider agrarian issues. The authors argue that the mass protests (particularly in Tahrir Square) involved millions of people including peasants, as well as workers and the urban poor. However this isn't developed and I'd have liked more material on the role of the peasantry in the overthrow of Mubarak and the wider movement - what was taking place in the villages and rural areas. This felt undeveloped in the book.

Post 2011 the authors show that repression has held back movements in urban and rural areas. However they point out that there is an ongoing need for further struggles. Poverty, inequality continue to blight rural communities in both countries and, in particular, neoliberalism continues to concentrate wealth and land in the hands of a small minority of landowners. There remains a real need to struggle against poverty and inequality as well as a sustainable, sustainable food system for countries in the Middle East.

At the heart of this is a critique of the way that colonialism and imperialism have underdeveloped and destroyed (and continue to do so) the agricultural systems of countries like Egypt and Tunisia. They conclude:

There cannot be any successful emulation of Western development models in Egypt and Tunisia or elsewhere in the Third World. Instead a new system of self-reliance, of 'becoming aware' is necessary for Egypt and Tunisia to establish a successful alternative to the policies and outcomes of imperialism. The new alternative requires a process of partial delinking from the world economy, for a political agenda of sovereign states to work in solidarity and to also develop incrementally a strategy for socialism that would necessarily involve the empowerment of the peasantry.

I would have liked to have this fleshed out further. What might socialism in the Middle East mean for small, agricultural producers? What would the freeing up of resources by a workers and peasant government in Egypt (for instance) mean? Indeed while removing the economic and political shackles placed on the peasantry of the Middle East is crucial, making them part and parcel of governing a socialist society is the key to their emancipation. Here I think that we might learn much from the experience in Russia in the immediate aftermath of 1917.

Despite my criticisms there is much of interest in this book and the authors are to be congratulated for making sure this neglected aspect to the Arab Spring is highlighted. For those trying to understand contemporary Middle Eastern politics, and argue for a sustainable, socially just agriculture there is plenty of material here to mull over.

Posted by Resolute Reader at 6:40 pm