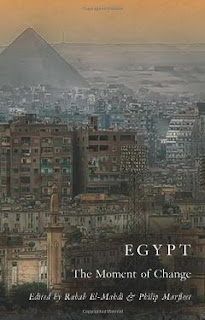 Revolutions these days seem two a penny. Mass strikes and protests did for Tunisia's dictator Ben Ali in what seemed like a few days. Egypt's Mubarak held on for longer, but as the mass of people in Cairo's Tahrir Square refused to give up in the face of the state's repressive force and strikes broke out across the country, even he couldn't remain in power. As I write this, Libya's Colonel Gadaffi appears to only have the most brutal of methods left to secure his position.

The authors of this collection of essay's published in 2009 are all political activists, if not revolutionary socialists. But they cannot have foreseen the events that have shaken the Middle East. The book though, is not dated by recent events. If anything it is even more relevant and I would argue, it is a crucial read for all those trying to understand the Egypt Revolution. Revolution is a process - and what happens is dependent on what has gone before. Egypt: the Moment of Change is about what has gone before.

Each chapter of the book looks at a particular aspect of Egypt's history and political/economic situation. All of them come together to give a unique picture of why the revolution broke out and who the major forces are. Egypt as a society is dominated by one key economic factor - the continued attempts to open up the economy to the free market. Pushed, over the past two decades by a variety of "economic advisers", who mostly hailed from Washington, the Egyptian state has been quick to sell off assets - state companies, land and so on, to outside investors. Such profiteers have helped drive up the cost of living for ordinary people, making the very richer even richer, and the majority of the people poorer.

Here is the contradiction that is so visible to the visitor - high security compounds and shopping malls - which allow in the rich, but deny access to the poor. It's why Egypt has experienced a variety of strikes and protests over the years. The corruption, the rising price of food, lack of access to jobs and drinking water combine to create a society bubbling over with indignation.

Various forces have sought to push this process forward and hold it back. The Trade Union movement up until 2011 was very much one of state unions. These existed to close down workers action, prevent strikes and form deals with the bosses. Union officials were little more than hired functionaries of the state, and many did very well out of this relationship. Various democracy organisations have exploded onto the streets over the years. The  Kifaya movement (meaning Enough) in 2004 did a lot to prove the state was not all powerful. Many brave men and women suffered indignation, brutality, torture and sexual assault because they dared to call for change. The chapter on these movements by Rabab El-Mahdi is particularly interesting because it shows how much the global movement against the Iraq War and in support of the Palestinian people helped to encourage things.

But economic factors aren't the only reason for this uprising. This repressive state, with its allegiance to the US and it's failure to stand up against oppression in the wider Middle East, in particular the question of the Palestinians and the US War on Terror, has been part of generating wider discontent and radical ideas.

The repression that Mubarak's state forces imposed on those prepared to stand up for something different is horrific. But it certainly wasn't the result of a few rotten apples. Aida Seif El-Dawla's chapter on state repression puts torture as an endemic and central part of the repressive process - on that exists and is supported at every level. Combined with the huge amounts of corruption amongst state functionaries and this leads to enormous brutality, often with little or no evidence.

But this state force effectively melted away in Tahrir Square. The police proved ineffectual at stopping a real mass movement. The army, itself a bloated and influential body, swollen on US "aid" dollars, were also unable to make a difference. But this must in part be due to the close links between a mass conscript army and the ordinary people of Egypt.

The struggles for land, against repressive taxation and corrupt landlords, the mass strikes that have shaken Egypt over the last five years have a common root. Those who argue today that Mubarak's fall was simply to do with the use of twitter or facebook, misunderstand the social processes that developed over years, involving many different actors, which culminated in the overthrow of the dictator. Mubarak's downfall is not the end of the story. The Egyptian Revolution has a longer road to travel. The struggle for justice and democracy, or access to water and decent food, for proper wages and the right to organise at work, will not be won by dispensation from a benevolent army council - it will have to be fought for. The Egyptian people have shown over the years that they are up to this task. We can wish them well and be inspired for our own struggles for justice.

This short book is an invaluable resource for all those wanting to get to the bottom of the process. It comes highly recommended and should be required reading. I hope they write a follow-up which details the revolutionary year of 2011.

A more detailed review from Socialist Review is here.

Socialist Worker (UK) continues to have unrivalled coverage and analysis from Egypt and the wider Middle Eastern struggles. Editor Judith Orr's eyewitness accounts were inspirational. Further analysis pieces will no doubt follow, though this article by Alex Callinicos on whether the revolution was a coup or not, is particularly useful.

For more on the mass strike movement prior to 2011 this article from the IS Journal by one of the contributors to Egypt: The Moment of Change, is very useful. An interview with an Egyptian socialist one the strike movement from 2007 is also interesting, in particular because it looks briefly at the relationship between socialists and the Muslim Brotherhood in various struggles.
Posted by Resolute Reader at 7:07 pm