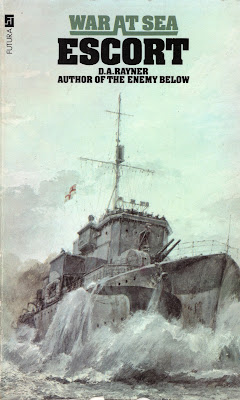 I learnt about D.A.Rayner's autobiographical account of his experiences at sea in World War Two in Richard Woodman's history The Real Cruel Sea. I sought it out as Woodman indicated it was a authentic account of what it was like to take part in convoy escort duties. It certainly is that, but what Rayner's book does is to show how a young man in the Volunteer Reserve experienced the war itself - much bureaucracy, reposting, training and finding himself in circumstances not of his own choosing.

Rayner also tells the chaotic story of the early part of the war, when there were few escort ships and plenty of targets for submarines. While much of his time is spent in the Western Approaches, he also finds himself in the Mediterranean and off the West African coast. There are numerous adventures and some close runs. Some of these are with his own side as Rayner is clear the type of commander willing to bend rules in order to ensure his crew have the necessities of life and to have fun. There are some slightly unbelievable accounts of parties, and other, more illuminating adventures such as when Rayner gives the nod and wink to his crew to purloin the mattresses being removed from first class cabins on an ocean linear being converted to a troop transport.

Initially commanding a trawler, then a corvette and then a group of corvettes, followed by a task force of destroyers, we see through Rayner the evolution of British convoy practice and the growing success. Its a tale well told, though Rayner, writing in the 1950s and though by now long since out of the navy, is careful to name drop and reference senior colleagues.

But of most interest are perhaps Rayner's comments on command. He clearly was the sort of officer than crews liked. On one occasion he, together with his ship's captain, roll up their sleeves to shovel coal. The men who were crewing the ship were not navy ratings, but former fishing boat crews that expected this work to be done by shore based personnel. Rayner breaks their near-strike by leading from the front. While those who have read Nicholas Monsarrat's work might see several parallels with Captain George Ericson in The Cruel Sea, their command style is very different. Rayner is much closer to, friendlier and open with his men.

Interestingly, despite saying towards the end that there are few women in the book because they didn't feature much, Rayner does mention women quite regularly. In fact he notes the way that the Wrens were often close to the ships, implying that many of them had multiple boyfriends on different ships that would arrive at different times, and that there were well established rules about who could see who. In this sense, and many others, this is far from many straight-laced naval biographies and gives quite a human account of the war. But certainly this is a book for enthusiasts, rather than those looking for historical work.

Posted by Resolute Reader at 9:09 pm