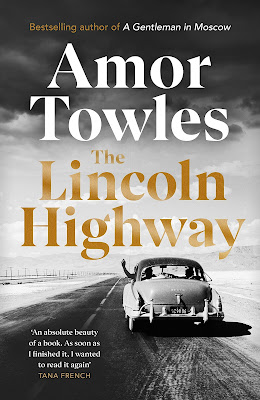 In 1954 eighteen year old Emmett Watson is released early from juvenile detention back to Nebraska in the USA. His father has died, the farm has been repossessed and his eight-year old brother Billy wants them to take a road trip along the Lincoln Highway to San Francisco to find their mother. Emmett is resourceful, clever and equal to most tasks. But he doesn't allow to the arrival of two "friends" from the work-prison, Duchess and Woolly. These two haven't been released, in fact they escaped in the very vehicle that brought Emmett back to Billy.

Rather than setting out westward, Duchess and Woolly have a plan to go East. Near New York City, Woolly's family home has hundreds of thousands of dollars in Woolly's trust fund and they want it. Promising a third to the brothers, but then stealing their car, these four characters engage in a complex, interlocking story, which Amor Towles uses to tell us their stories and a lot about 1950s America.

But most of all this is a story about journeys. The literal Billy obsessively reads from a boys own style book that details heroic journeys of heroes, real and mythical. In his eyes the trip along the Lincoln Highway would match those travels and his vision enraptures Woolly, a young man whose wealthy family cannot seem to cope with his needs. While Duchess and Woolly travel to NYC in the stolen car, Emmett and Billy jump the train and meet a series of brilliant characters from bottom of society, many of whom teach them (and the reader) the realities of the world while also being part of their own epic journey.

Part road trip, and indeed a homage to 1950s America, this is also a sort of adventure story as the boys find their way too each other and themselves. Its also a picaresque story whose episodes tell self contained stories but which frequently interlink. Its also deeply moving, and I was particularly touched by Woolly's character, who for the first time finds a group of people who understand him - rather than punish or tolerate him. I suspect this will be one of the best books I read all year.

Posted by Resolute Reader at 5:32 pm