Richard Woodman - The Real Cruel Sea: The Merchant Navy in the Battle of the Atlantic 1939-1943 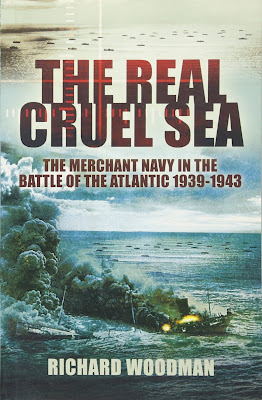 Over 30,000 members of the Merchant Navy lost their lives during World War Two. Most of their names are inscribed on the Tower Hill memorial near the Tower of London. It's a beautiful memorial, near a smaller memorial to those Merchant sailors who died in the First World War. Both memorials are seldom visited, despite their location.

The sacrifice of these sailors almost all of whom were men, is mostly forgotten. During the war, appalling conditions, the dangerous work and the low wages meant that crew often didn't go back to see. To counter this the British government produced a badge with the label MN to create a esprit de corps. Many men wore it upside-down, joking - or perhaps not joking - that the letters now stood for Not Wanted.

Richard Woodman's book is a detailed account of the primary battleground of Britain's Merchant Navy during World War Two - the Battle of the Atlantic. He mentions only in passing convoys to Russia and events in the Pacific and Indian oceans. It was in the Atlantic that most of those 30,000 sailors lost their lives and where their most important work was done.

This is a massive book. Nearly 800 pages of small type, detailing in almost complete detail the events of the Battle. Open the book at random and there will almost certainly be a story of a ship that sank, a crew that abandoned ship or a heroic voyage in a lifeboat. The backdrop to this is a British Admiralty that, for most of the War, simply could not provide the escorts that were required to stop German U-Boats sinking ships. The Convoy system that was rapidly introduced after heavily initial loses went some way to saving ships. But there just wasn't the military protection that was needed - Britain was too short of destroyers and other escort vessels, and these had duties elsewhere.

As a result, the carnage dominates Woodman's history. The book opens with the loss of the passenger liner Athena. A ship sunk by a torpedo a few hours after war was declared. Over 1,400 people were on board, including 500 Jewish refugees. A model evacuation meant that the loss of life was relatively low - 117 passengers and crew. It was a propaganda disaster for Germany, and a success for the British, helping encourage a more anti-Nazi position in the US. Later ships would not be as lucky, and German submarines became adept in a total war against shipping. Some U-boat captains showed compassion to survivors, others committed war crimes, or demonstrated indifference.

In his desire to document so much, large parts of Woodman's book become almost lists of ships sunk, their cargos, and captains. But Woodman does manage to excite the material by focusing on specific tales. The best parts, and there aren't enough of them, are the oral histories of sailors. I also felt that more could have been made of the economic role of the ships. How was the war effort hampered by loss of material? Why was Britain exporting goods to the rest of the World at the time? What was being imported and why - who prioritised and decided what materials were needed.

Woodman explains well the tactics of both sides. I was surprised to find that one great tactical mistake of the British military was to not deploy aircraft to the theatre in significant numbers. It's clear from later in the war that this made a significant improvement to the ability to combat submarines, yet the focus was always on bombing German civilian targets. A strategy that was, even at the time, known to be limited. Only one raid was made against German submarine bases, which seems incredible to me.

I was also shocked to learn that the US failed to learn the lessons. When the US entered the war, they did not take up the convoy system until hundreds of lives and ships had been lost. German submarine officers describe seeing ships silhouetted as easy targets against the backdrop of the brightly light US cities that were not blacked out.

Two other things stand out. For most of the first part of the war, British seamen were considered to have broken their articles, their contractual bond with the captain of the ship, when they were sunk. Thus survivors, who lost everything in the sinking and their dependents also lost any pay the moment they entered the lifeboats. It was an indignity and insult, and often the first their family knew was when the money stopped coming. The second thing is the multinational character of ships crews. Many of the men who died originated from British colonies and China. They lost their lives or fought for survival alongside their crewmates, fighting for a country that cared little for them, and even less for the Merchant Navy sailors. While there are occasional stories of resistance and mutiny by sailors, they are very much a handful of accounts.

Its a neglected story, told in great detail by Richard Woodman's massive book. Sadly it finishes in 1943 when the U-boat threat was almost over. I would have liked more detail on events afterward - the troopships and return of troops after the war would have been fascinating. Had Woodman sacrificed some detail more justice could have been done to the wider story. Nonetheless for those who've read or watched The Cruel Sea, this is excellent background material.

Posted by Resolute Reader at 6:13 pm