Paul Lund & Harry Ludlam - The Fate of the Lady Emma 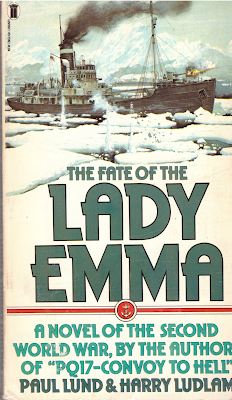 Authors Paul Lund and Harry Ludlam are best known for their oral history works about the British Navy in World War Two. Lund served on a converted trawler during the war, and was on the infamous convoy PQ17 to the Soviet Union. The authors' account of that disaster was told, through the recollections of many participants in their excellent book PQ17 Convoy to Hell.

Lund and Ludlam also told the history of the Royal Navy Patrol Service in their book Trawlers Go to War, which detailed the sterling work of converted fishing craft from Dunkirk to D-Day. The oral testimony in these books, plus personal experience however is put to a slightly different use in The Fate of the Lady Emma.

Lady Emma is a work of fiction, but is clearly heavily influenced by Lund's experiences on HMS Lord Austin. The novel follows tells the experiences of a fresh recruit to the Patrol Service Peter Price as he finds his sea legs on the Lady Emma. We're introduced to a mixed crew, and Price goes through the formative experiences of being mocked and gently ribbed until he finds his niche. He learns the ropes, begins to understand the various factions and personal loyalties and hides the fact he's trying to get commissioned from his crew mates. All this is fairly standard fair for a WW2 naval novel from the 1970s.

What stands the book above others in a crowded genre is how it is clearly based on real experiences. The nerves, the stress and the sea-sickness, the detailed descriptions of the dirty jobs. These read, not as a dull series of recollections, but as part of Prices' journey to a fully fledged sailor. I also enjoyed Price's wonder at the places he visits. Take this description of a brief stop at Akureyri in Iceland:

By evening they were steaming up a placid fjord. The weather had made one of its lightning changes and the sun was shining, the air still and the atmosphere crustal clear. It was nearly 8pm when they approached a small island on which there appeared to be a collection of military huts... the 'hut's' were the houses of the most picturesque village anyone had ever see. Nestling beneath a background of towering white-clad hills, the houses were painted all the colours of the rainbow. In the centre, standing alone in its quaint beauty, was a miniature church, looking straight out of Grimm's fairy tales.... The crew stood at the ship's rail and gazed spellbound on the loveliness of this unexpected jewel shining among the rugged desolation.

It is only in the second half of the novel that the "action" starts. The convoy is scattered in fog, they encounter enemy aircraft and a submarine, and rescue a shipwrecked sailor. But the point of the novel is not the action - again unusual for the genre, but rather the authors are telling the story of a voyage and the sailors' experience. For that reason the book sits comfortably alongside their non-fiction. Readers interested in World War Two, the Arctic convoys and the Naval war will enjoy this novel. But it is much more than another navy tale. It is also a moving account of the individual in a larger conflict, and the ending is remarkably touching.

Posted by Resolute Reader at 10:42 pm