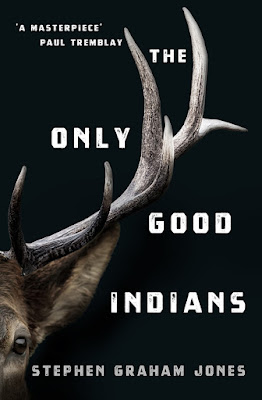 I received this novel out of the blue for Christmas. I was immediately intrigued by its focus on Native American people in contemporary society, but put off by the genre. I'm not great with the gore and violence of horror novels. However The Only Good Indians turned out to be a good choice on behalf of the giver, as it is a great, if bloody, novel that takes up some interesting and important ideas.

The novel centres on a group of friends from the Blackfeet tribe who, ten years ago, shot some elk. It was an incredibly successful hunt, but the intervention of the authorities meant that they were unable to use the dead elk properly. Now, a decade later, the are being killed by apparently supernatural forces. The spirits of the elk have returned and want their revenge.

But there is nowhere for the men to go. As they are picked off, one by one, and their friends and family threatened, they are simultaneously trapped by racism, and poverty. There is no escape for them from the monster that is killing them and the wider monster that demeans and devalues their lives in wider society.

This is not an easy read, and as I said some people will be put off my the genre, rather than the subject matter. But I'd suggest that there's a strong tradition of horror novels being used to highlight the wider horrors of society. Stephen King's IT is a classic example. Stephen Graham Jones' The Only Good Indians stands in this tradition and updates several of those themes.

Posted by Resolute Reader at 1:49 pm