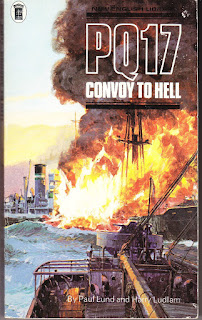 The bravery of merchant seamen is often overlooked, and despite the horrific realities of the Arctic convoys during World War Two the experiences of those sailors was often discussed only through accounts of the naval escorts.

In 1942 PQ17 sailed from Iceland to the Soviet Union carrying vital supplies intended to alleviate the Russian military crisis during the siege of Stalingrad. What took place afterwards was a disaster of the highest magnitude but was the subject of silence and cover-up by the British government and military.

It was only after the war, and partly because German accounts of the convoy turned out to be more truthful than allied ones, that questions were asked. In the late 1940s and 1950s it became a major issue for the British media who demanded to know why the convoy had been decimated.

Paul Lund and Harry Ludlam's account from the 1970s draws heavily on the accounts of those involved. Paul Lund himself was on board the ASW trawler Lord Austin a small escort ship that was part of the convoy. The book is fascinating in part because it is more than a military history.

PQ17 was a heavily escorted convoy, though it lacked an aircraft carrier. At that time, the greatest naval threat was the Tirpitz and her associated naval ships. Much of PQ17's route was within reach of German air attack, but the Tirpitz was seen as a particular threat because it could easily outgun the escorting warships. Misinformation at the admiralty led to the convoy being ordered the scatter hundreds of miles south-east of Spitzbergen. The escorts were ordered to break off eastwards to engage the surface threat, though this was non-existent. For days afterwards the merchant craft came under sustained air and u-boat attack. Thousands of tonnes of shipping were destroyed and hundreds of men and women lost their lives. Despite the bravery of the armed merchant craft, little could be done to protect the individual ships or small groups and they were easy pickings.

Later analysis would lay the blame squarely at the desk of the First Sea Lord. That would be little comfort to those that were killed or frozen in the cold waters. And while this book finishes with the story of how the truth came out, most of it is an account of those harrowing experiences. I was struck by a number of things reading this. One was the way that the u-boats often surfaced and assisted (sometimes in a minimal way) survivors of life boats and rafts. The other was how many people did survive, picked up by other ships or making extraordinary journeys to land. But perhaps most fascinating are the little bits of social history that come through the personal accounts. Take this description of conditions on Austin after she had picked up dozens of survivors.


On Austin we turned to looking after out guests... They were men of mixed nationalities, Americans from both north and south, and Argentines, Poles, English and Chinese... All were given a double tot of run and then began the problem of feeding and finding sleeping room for eighty-nine extra bodies. The Chinese were very helpful, offering to give a hand in the mess and the galley, and refusing to sleep anywhere but under the whaleback on deck. The survivors as a whole were quite cool. cheerful and fatalistic... We had to improvise nine sittings for meals.. and there was a desperate shortage of cutlery. The white Americans did not like eating or even mixing with the coloured seamen and in the confined space quarrels sprang up between them.

Once again we are reminded that World War Two was won by the sacrifices by men of many different backgrounds and nationalities, but that racism was a real experience too.

The other fascinating aspect to this book is the experiences of the survivors when arriving in the Soviet Union - both in terms of the different way of life, but also the social structures. Without pretending that the USSR in the 1940s was a socialist paradise it is interesting to see how the allied men found it surprising to see women playing a leading role in production. All the Russian ships on the convoy had female sailors for instance.

PQ17 remains shorthand for an immense naval disaster. Future convoys certainly learnt from events, but one can't help but feel that this should never have happened. Certainly that is the conclusion of many of those who took part. Lund and Ludlam's book is likely dated and more information is available, but in its accounts from survivors of life on a merchant ship in World War Two and their visit to the Soviet Union it remains extremely fascinating.