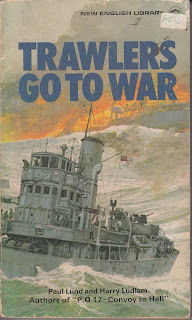 At the outset of World War Two Britain lacked ships capable of meeting the needs of its defence. That the navy lacked aircraft carriers and destroyers is one thing, but it also desperately needed smaller craft that could be used to escort convoys, sweep for mines or hunt submarines. In short order the admiralty took control of many existing fishing vessels – trawlers in particular, but also whalers and smaller craft like herring drifters – both old and ones on the production line. These ships were equipped with outdated, inadequate and in some cases antique weapons and sent out to face a formidable foe.

The new Royal Naval Patrol Service, based out of the “Sparrow’s Nest” in Lowestoft, was undermanned, undergunned and extremely brave. Many of the men who crewed the craft were not full time naval ratings, but former fishers and other crew who were commissioned into the force. Rules and regulations were not quite the same as the navy, and the RNPS soon developed a reputation for brashness and bravery. The men, and ships, acquitted themselves well in all areas of the war at sea from 1939 – 1945.

This excellent social history is based on many deeply personal accounts by participants, one of whom, Paul Lund, is co-author. The stories range from the humourous (there’s lots of black humour) to the shocking. They cover the conditions at sea, the inadequate food and the heavy drinking that crews did to cope as well as the long, dangerous and difficult voyages in appalling sea conditions. But all these are the backdrop to the violence of the conflict.

Under-equipped and often years out of date the ships did an amazing job looking for mines or in an escort role. More amazingly they tackled appalling conditions as part of convoys to Iceland or Murmansk in the Soviet Union and they were at Dunkirk, D-Day and Malta.

But because this is oral history the reader never forgets that these ships were crewed by ordinary men in extraordinary times. While reading the accounts of the RNPS during the invasion of Norway it occurred to me how many of the unlikely WW2 films that proliferated in the 1960s were actually remarkably accurate when it came to individual bravery (and some of the accounts in this book rival films like The Guns of Navarone for daring do). The infamous story of the “small ships” at Dunkirk may well have grown in the telling as a propaganda story, but that does not negate the fact that many small-ships brought off hundreds of men from the Dunkirk beaches. One trawler carrying around 1000 troops back to Britain in what must have been shocking circumstances.

For those interested in the experience of ordinary people during World War Two this is a highly recommended, readable account of a forgetting part of the conflict. There are occasional hints that this was not just an experience of the British – at least one trawler is captured from Germany towards the end of the war. But given Britain’s maritime history it is quite unique to the country for which the sea was both saviour and barrier to its participation in the conflict.

Over 400 ships of the RNPS were lost in the conflict – 2,385 men were lost at sea and have their names on the Lowestoft memorial dedicated to them. This little history puts their stories, and those of the survivors, at the heart of the history of the RNPS and reminds us that wars are always fought by ordinary people.