Olga Ravn – The Employees: A workplace novel of the 22nd century 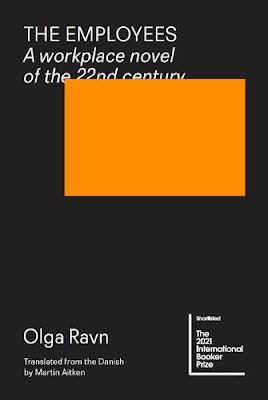 I must admit I was intrigued when I first read reviews of Olga Ravn’s book The Employees. For socialists and trade unionists it is always fascinating to imagine life in the future – either in a socialist society, or a continuation of our existing one (assuming capitalism has a future that is). Ravn’s book was first published in Denmark and brilliantly translated by Martin Aitken to English. It has also been nominated for the International Booker and, from the length of time I had to wait to get a copy from my library, I think it is doing very well.
Told through statements by workers, this is not a long novel. In fact some of the pages are barely a few lines of text. Anyone who has had to fill in pages of nonsense on an annual appraisal will recognise that sometimes words come easily, and sometimes monosyllabic answers are best when replying to management queries.

But these statements, woven together tell a story. It’s a workplace, but not like a call centre or factory. Gradually we learn that these workers are living on a interstellar ship, that’s left Earth with no plans to return. We also learn that some of the workers are not human – they are humanoids, human in almost all biological features except that they cannot reproduce and they can be replicated from their backups. We also learn that on a planet called New Discovery the crew found some objects. These objects take different shapes and interact with their handlers – some through sound, others through emotion.

In fact sensation, and emotion are key elements of this story. Why are some of the interviewees compelled to taste, stroke, even put alien things into their mouths? Why do some of them feel the urge to scratch imaginary bumps and lumps in their skins? Is it part of their memories of home? Is it part of how they are trying to remain human? Or are the objects changing them? It's all very curious.

As we read more of the crew statements we learn two things. Firstly that work isn’t that much different. The rooms are small, unless you have to clean them. Factions run deep among the crew. Management are feared, and workers know (or assume) their every move is being watched. We encounter cleaners and pilots, those born on Earth and those who’ve never been there. And some are not human.
Something’s gone wrong. We know little about the ship, or its mission. Ravn tells us nothing about hyperdrives or other SF standards. But she tells us a great deal about what its like to live in an enclosed space, working long hours and missing your home. We also learn what the disposability of labour means on a spacecraft millions of miles from home.

This is a fascinating read. I don’t pretend to have understood it all. It is certainly a book that will warrant a re-read. But in writing about the future of work, Olga Ravn’s certainly told us much about our world today.

Posted by Resolute Reader at 6:16 pm