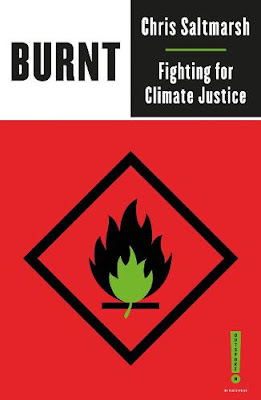 I started reading Chris Saltmarsh's new book Burnt on the eve of the COP26 climate talks in Glasgow. As part of the COP26 Coalition many of us were organising demonstrations to highlight the failure of the COP process and demand Climate Justice. This crucial theme has often been neglected by environmental movements, and Saltmarsh makes it clear why it is so important in his introduction:

At the foundations of climate injustices is class. The inequitable impacts of climate change are distributed most reliably along the lines of wealth and economic power. The poorest and working-class - whether you live in California, Andhra Pradesh, Puerto Rico or anywhere else - have more in common in the face of climate change than executives of fossil fuel companies and other capitalists profiting from disaster.

These themes ran through the protests outside COP26 and in many other towns and cities in Britain. Refugees, migrants, anti-racists groups and people from the Global South spoke passionately about how capitalism's climate disaster was destroying their lives, in the interests of profit.

Saltmarsh's book is the latest of a number of works that argue that socialism is the only answer to the climate crisis. He sets his stall out clearly, and early.

If our economy were owned and democratically controlled by workers and the public, sectors like energy, water, transport, housing, food, health and social care, education and manufacturing could all be run for the benefit of society and not shareholder profits. Together we could manage the transition to a zero-carbon society quickly and fairly... I make the case for a socialist climate justice politics oriented around a Green New Deal and propose a strategy for achieving it into the 2020s and beyond.

Socialists who have been active in the environmental movement will be relieved that these arguments are more and more common. In fact, my feeling was that the general sense of the COP26 protests, had an anti-capitalist core. Though there was less clarity on what "system change" meant in practice, and even less on how we might get there. So Saltmarsh's book is welcome.

He beings with an examination of why "capitalism is both the root cause and the biggest barrier to change", arguing that "it is capital's insatiable drive for more and more accumulation by exploiting workers and the environment which keeps us on this path". Unlike some recent left books on the environment, Saltmarsh is also clear that while the neo-liberal era of capitalism has made things worse by encouraging unrestrained corporate degradation of the environment, "climate change existed before neoliberalism". The problem, we must emphasise, is not a particular manifestation of capitalism, but the nature of capitalism as a whole.

Much of the book is an exploration of how we could create a sustainable world - the type of industries and jobs we need, and how a just transition of the economy must not fail ordinary working people. Saltmarsh is also an activist - and clearly we have both, unknowingly, been on many demonstrations together! He has some important critiques of how the environmental movement has organised. For instance, he notes that some direct-action camps are "typically only a temporary impediment to the powers of state and capital." I agree. I think, for instance, that the camps at fracking sites in the UK were important in raising the issue of fracking as a problem. But it was this, combined with growing movements that involved much wider forces - including trade unions - that made the issue a major political issue for the government. Borrowing Naomi Klein's term for the movement against fossil fuel expansion, Saltmarsh points out

When Blockadia has been most successful, it has frustrated fossil capital's relentless drive for extraction in some of the most socially and ecologically egregious cases. But its victories have generally been relative and precarious, downscaling or delaying construction... for each fossil fuel project Blockadia faces own, there are so many more forced through despite activists' best efforts, or subject to no organised opposition at all.

How to win is the key question. Saltmarsh is very clear. The "biggest barrier to climate justice is the resistance of capital". To this power, I think that we have to counterpoise another power - that of workers. Workers power has both the strength to stop capitalism and the potential, in its revolutionary movements, to create the institutions in society that can replace capitalism. In this they will have to challenge the capitalist state.

Here Chris Saltmarsh and I probably disagree. Saltmarsh sees the capitalist state as "the only political body with the power to confront capital" and that we "need to use state power for climate justice". He also writs that "the state... is the most appropriate we have right now for addressing the climate crisis".  By state Saltmarsh explains he means the "set of interconnected institutions which govern a sovereign nation". But this is not correct. The state is not a neutral force, it is an instrument of class rule, and the capitalist state it exists to protect and extend capitalist instruments. This is why it is so hard to reform, or protest, fossil fuel capitalism. Fossil fuels are central to the capitalist economy, so deeply embedded in the system that politicians of every hue find themselves defending the industry.

The capitalist state cannot be captured by social movements - certainly not ones that try operate within the boundaries of their democracy, nor even by radical movements that seek to transform the state. In contrast, I think we need to build the sort of mass movement that can win urgent reforms now (including a Green New Deal) but recognise that because these go against everything capitalism stands for, these movements will have to grow into a direct challenge the capitalist system itself, and institute a workers' state. If COP26 taught us anything, it is that this is the sort of movement that we need - however daunting building it will be.

Saltmarsh concludes by saying that mass protest and social disruption should not be our "default action" but a weapon in our arsenal. Key, he says, is building "power by organising communities and workplaces, building local and international solidarities and working through political parties and trade unions" which, in moments of crisis, "can force the hand of the ruling class".

While none of these things are wrong - as a strategic tactic, they are inadequate. Ultimately it will be a choice between capitalism or extinction, and as Rosa Luxemburg says the alternative can only be socialism. But that will not be wished into existence. It will arise out of a revolutionary moment.

Given that Saltmarsh's book is short, perhaps I have dwelt too long on my disagreements. It is, after all, one of the clearest socialist arguments I've read in some time around the environment. But writing in the shadow of COP26's failure, it is clear that the capitalists won't give up their system. We need socialism urgently. Despite my disagreements, I hope that Chris Saltmarsh's book provokes plenty of radical debate about how we get there, and I look forward to being on the same demonstrations as him in the future.

Debating How to Save the Planet
Gates - How to Avoid a Climate Disaster
Malm - Fossil Capital
Foster - Marx's Ecology
Magdoff & Tokar - Agriculture and Food in Crisis
Angus - Facing the Anthropocene: Fossil Capitalism and the crisis of the Earth System
Klein - On Fire
Commoner - The Closing Circle
Marx – The Civil War In France
Engels - The Origin of the Family, Private Property and the State

Posted by Resolute Reader at 12:09 pm