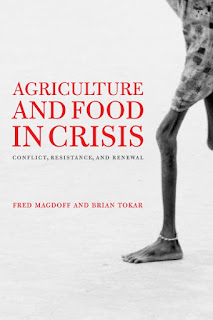 The question of agriculture and food is one of the most pressing issues for society in the early 21st century. It is inextricably linked to the questions of climate change and the environment, to the distinction between town and country and to issues of health, democracy and governance. This Monthly Review book is thus very important. It brings together some of the most important writers and activists on food issues who collectively put forward in a series of short, readable and incisive essays their thoughts on the current situation and possible solutions.

We live in a world were food is a marker of divisions. Its marks the differences between rich and poor and between the rich nations and the poorest. Within countries there are tremendous differentials between who gets to eat and who goes hungry. In the US, 17% of children under five are at high risk of developmental damage because of hunger. Not because they eat the wrong foods, or bad foods but because they don't have enough to eat. 36 million Americans are in "food insecurity" (these are 2007 figures). These figures have the power to shock, because they are from a country we consider affluent. We are used to the idea that Africa or Asia has millions of starving people. But for people to go hungry on such a scale in America or Europe is a surprise.

But many of the essays here point out that the causes of hunger in Africa and Asia, and that of those in richer countries have the same cause. This isn't that there is not enough food produced - at the height of the great crisis in food prices in 2008, there was still 1.5 times enough food to feed everyone at current demands. People starve in Africa, Asia and everywhere else because they are poor and cannot afford to eat. Over the last 20 years, food production as grown at around 2% a year. Population has grown at 1.14% on average. Food shortages aren't the problem, the distribution of wealth is.

But there are other contributing and related factors. Several powerful essays document the way in which global food production has become the sharp point of the battle to impose neoliberal mechanisms on the whole world. International bodies encourage the switch from localised production of food for consumption to mono-cultural agriculture for sale on the world market. This is nothing new - its been part of how the world economy has been shaped post World War II, but in the last two decades there has been a rapid acceleration of this change. Food was very much a weapon of the Cold War. Food aid was granted to win allegiance to one side or the other. But the US also helped to create markets for its own products. Out with local grains, in with US wheat. This continues today - wheat exports to Africa increased by 35% between 1996 and 2000. Cheap imports wipe out local production and help create the conditions were only food for international markets can survive.

I cannot hope to cover the impressive facts, figures and arguments within this book in this short review. Nor can I do justice to the alternatives that the various authors put forward. They argue that there are real changes that can be made, on national levels to avoid the various food, climate and social crises that are faced. Some of these are demonstrated by the very real improvements made by a number of left wing governments in Southern and Latin America. Chapters here on Venezula (without falling into the trap of lauding President Chavez from the rood top) demonstrate how by encouraging and supporting local, sustainable practices, yields of crops can dramatically rise, based on sustainable and ecologically rational choices.

If there are two problems with the book, I would say they are this. Firstly all the authors demonstrate that the problems of food production are ones based on capitalism. In particular, the concentration of food production and distribution into the hands of a few enormous corporations. This makes food and agricultural a tool of the desire to increase profits, rather than feed people. However simply advocating the encouragement of smaller, localised farming based on state support can fall into the trap of encouraging a belief that all these problems can be solved if only we elect governments that can blunt the worst aspects of capitalism. There is some truth in this of course. Venezuela and other places show this is possible to a limited extent, though they are still at the mercy of the world markets and the powers of western imperialism, which has, as the essays themselves demonstrate, smashed up similar, rational agricultural systems in the past.

Secondly, if we have identified the barrier that is capitalism, then we should at least acknowledge the debates about what an alternative could look like. In particular, the role of the peasants, smaller farmers and agricultural labourers in overturning the system. This is something that has preoccupied radicals from Prince Kropotkin, to Karl Kautsky, Marx and Lenin over the centuries. Several of the essays do refer to the importance of ordinary people taking back land from the rich, resisting their displacement and fighting to create the sort of agriculture they need. There is no real acknowledgement of the role of those people fighting against the system, once they become farmers, it is almost like that is enough for these writers.

These however are criticisms in the spirit of wanting to encourage more people to read this book and think about the questions it raises. As one essayist asks, can capitalist agriculture really deliver for 9 billion people in an epoch when oil may well reach $300 a barrel. It's a good point, and the ideas within this book are important parts of those debates and offer some vision for the way forward.


Mazoyer and Roudart - A History of World Agriculture
Bello - The Food Wars
Vergara-Camus - Land and Freedom: The MST, the Zapatistas and Peasant Alternatives to Neoliberalism
Patnaik & Moyo - The Agrarian Question in the Neoliberal Era
Posted by Resolute Reader at 9:01 pm