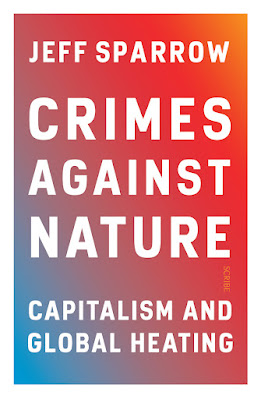 The failure of COP26 was no surprise to most environmental activists - the domination of the Global North and the insidious role of fossil fuel corporations undermined any chance of success. Yet the real reason COP26 failed was that it is a capitalist institution and capitalism itself is a system of ecological destruction.

Australian socialist Jeff Sparrow puts capitalism at the centre of his new book on the environmental crisis. On its own this would be important. Despite the success of Naomi Klein's This Changes Everything, too few such books actually get capitalism. But Sparrow also introduces two other key themes that are frequently neglected even in anti-capitalist environmental writing - workers as the agency for change and their role in creating a democratically planned economy.

Sparrow opens by highlighting the enemy, and setting out the great conundrum of mainstream ecological politics:

At the very moment we need collective heroism and unparalleled determination, we're told we're criminally worthless; mindless consumers obsessed only with material satisfaction, too lazy and stupid even to recycle, selfishly reproducing without through to the ecological impact of our children, and almost genetically predisposed to selfishness and avarice.

The chapters that follow take apart each of these criticisms and argue that far from being the problem, ordinary people are the collective force that can put capitalism, and the capitalists, in the dock for their "crimes against nature".

Capitalism is a system of generalised commodity production, which has evolved in a particular way. However its evolution has not arisen out of blind chance, but from the conscious decisions of politicians and capitalists. Sparrow shows one way this happens in his opening chapter through a discussion of the way that cars have become the dominant method of travel in the Global North. As a 2010 NASA study showed motor vehicles are the "US's greatest contributor to global warming". Yet this need not have been the case. Cars were original rejected by the vast majority of people as being dangerous, polluting and the playthings of the rich. The US car industry had to fight a battle to make this mode of transport acceptable. The fossil fuel companies also had to fight a battle to displace electric vehicles from their dominant position, and they organised to destroy the low carbon, mass public street car systems.

As cars came to dominance they reshaped cities, work and leisure. The car came to symbolise freedom from dirty, congested urban areas, even as it created those spaces. Public transport became stigmatised. Walking became criminal. As Sparrow concludes:

Had the desire of working Americans for safety been prioritised, and their enthusiasm for public space been respected, transport might have been designed on the basis of public good rather than private enrichment. If that had happened, the planet would look very different today. Instead a relatively small number of entrepreneurs successfully campaigned to reorganised the country - and subsequently the world - so that their particular business model might succeed.

It is a story that is repeated time and again. Sparrow shows how the plastic and packaging industry worked the same public relations game, inventing the "litter bug" as the chief scourge of the environment, rather than the packaging companies moving towards disposable containers. It was a path the car companies had trod when they made "jaywalkers" guilty for accidents on the road caused by their own cars.

But a real strength of Sparrow's book is that he shows a deeper dynamic to how capitalism transformed our relations to the environment. The enclosure of land in England for capitalist agriculture transformed our relationship to the landscape - creating a nation of wage labourers, instead of peasant producers, separated and distinct from the nature that humans shape to fulfil our needs. As he points out, "capitalism disenchanted the land, profaning the previously sacred ritual by which people had once related to their environment. New priorities were forced, painfully and brutally on the bulk of the population, in ways that made environmental stewardship impossible and facilitated the crisis that we now face". This is particularly obvious in the way indigenous land management schemes were destroyed by colonial capitalists. Drawing on writers like Bill Gammage and Bruce Pascoe, Sparrow shows how colonial agriculture destroyed historic ecosystems and traditional food production, in ways that undermined the very viability of the landscape as a place to support human life.

Car companies, packaging manufacturers and fossil fuel barons are symptoms of a wider structural problem with society. They are the public, and most obvious face, of capitalism's crimes. But to extend Sparrow's book title - they are merely the most obvious criminals, while the wider system of organised mafia is embedded in society.

Outside COP26 protesters demanded Climate Justice. Sparrow shows how capitalism's environmental crisis has created millions of victims, but also pushed the blame onto those who have done the least to destroy the planet. He shows how the Malthusian myths of overpopulation are used to blame the very existence of people, and racist ideas were at the heart of early attempts at environment protection. These are very powerful chapters.

But I wanted to finish by highlighting the importance that Sparrow attaches to the working class as a force for change. He does this in two excellent chapters that highlight the way that workers can be won to a vision of defending the environmental alongside their working conditions and how their struggles can form the basis for the collective reorganisation of society for democratic planning of production. Sparrow explains the first by telling the inspiring story of Australian trade unionists in the 1970s who introduced Green Bans and successfully protected many of Sydney's green spaces as part of collective, militant action. Sparrow then shows, through a discussion of William Morris' News from Nowhere how a democratic planned economy could work - a centralised organisation with decentralised local, mass participation. It's an inspiring vision of a post-capitalist world. He concludes:

As Morris knew, if we don't believe that the world might be different, we're stuck with the world as it is. If we can't imagine a fairer society, we can't protest injustice. A democratic and planned economy offers us an alternative model of what life might be like - and thus a banner under which to fight today.

Such a vision is badly needed in the 21st century. The banal platitudes on offer from politicians and billionaires at COP26 give no hope, while the environmental movement all too often sees the future as a better, fairer, greener capitalism. Socialists have to raise a vision of socialism, that rejects the top-down nature of Stalinism, but emphasises mass participation, democracy and freedom as a way of inspiring a radical, revolutionary struggle. If I have one thing to add to Jeff Sparrow's inspiring, educational and very readable work - we have to also build the socialist organisations that can help make that alternate reality. Jeff Sparrow's excellent book helps make that task easier for all of us and joins a growing number of works by revolutionary socialists on the environment. Read it.

Sparrow - Fascists Among Us: Online hate and the Christchurch Massacre
Saltmarsh - Burnt: Fighting for Climate Justice
Malm - Fossil Capital
Angus - Facing the Anthropocene: Fossil Capitalism and the crisis of the Earth System
Extinction Rebellion - This is Not a Drill
Dawson - People's Power: Reclaiming the Energy Commons

Posted by Resolute Reader at 1:58 pm