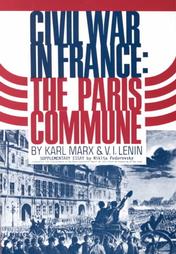 Marx's Civil War in France is both an impressive history of the Paris Commune – the short lived, but important moment in working class history, when working people rose up and took control of Paris, and a powerful polemic against the barbarity of the capitalist system and those who stand in its name.

There is no doubt, from the various drafts that exist and have been since published that Marx worked hard to produce a sucinct, but detailed historical account of the Parisian events. The Civil War works though, precisely because Marx applies his own approach to history to the events, rather than merely reporting things. The Commune then becomes a living breathing attempt by working people to seize control of their lives, reorganise society on a more democratic and inclusive basis, precisely because it is located in the a viciously corrupt and disorganised old order. Marx's brief account of French history leading up to the Commune paints a picture of a newly emerged capitalist order, intent on enriching a tiny minority, at the expense of both the wider population and France's own position in the world order. “The proletarians of Paris, amidst the failures and treasons of the ruling classes, have understood that the hour has struck for them to save the situation by taking into their own hands the direction of public affairs.”

For most readers though, the parts of the Civil War that are most interesting and inspiring are the brief accounts of the ways that the Communards attempted to reorganise their society. The direct democracy, delegates paid no more than 6000 Francs, or the average working wage, were instantly recalable by the electors. As Marx puts it, “instead of deciding once in three or six years which member of the ruling class was to misrepresent the people in Parliament, universal suffrage was to serve the people, constituted in Communes, as individual suffrage serves every other employer in the search for the workmen and managers in his business.”

Marx uses the term Universal Suffrage as it would have been understood in his time. This was suffrage for Male adults only. Woman played, as Marx reports, a central role in the Commune and suffered equally the fate of their male Communards, but despite their role, they weren't given full democratic rights. The working class movement had to develop further before these were to be fully understood and accepted, even by its most advanced sections.

The Commune wasn't just about radical democracy. Attempts were made to kick religion out of education and provide free education for all that needed it. The seperation of church from state meant that Priests feel back on the donations of their worshippers, as Marx quips, like the apostles they claimed to follow. Indeed, shot through the Civil War, is Marx's sense of humour and vicious barbs aimed at those who opposed the Commune.

And those that opposed it, destroyed it. Marx's points out that working people cannot simply seize control of the state and wield it in their interests. The state machinary must be destroyed and rebuilt in order to help the newly victorious class stabalises its power and defeat the old order. The most barbaric means were used to destory and isolate the Commune, and many thousands perished in its defense. If the enemies of the Commune highlight atrocities of the Communards, they do so to cover the fact that these were in retailiation for far greater crimes committed against innocent working men, women and children. Marx quotes independent witnesses to highlight these, and points out that the capitalists, despite their talk of freedom and democracy only care for the freedom to profit from other peoples labour. When this order is challenged, as the Paris Commune did, they will react with the utmost brutality to maintain the status quo.

The Civil War is far from the complicated writings that many expect Marx's writings to be. Indeed it is one of the most accessible of his works, though some French history will help readers. My edition has a very useful introduction by Frederick Engels, written on the 20th anniversary of the Commune, as well as some supporting introductions from Marx to put a wider context. Earlier drafts of the pamphlet are online and will reward those willing to delve deeper into this important revolutionary moment.

Gluckstein - The Paris Commune; A Revolution in Democracy
Posted by Resolute Reader at 6:54 pm

I've been wanting to read a history of the Commune, but before this all I've seen on Amazon was Alistair Horne's "The Terrible Year"...not a book I'd want to read, given how baldly Horne favors 'enlightened despots' over populist movements.

In addition to the Marx book, I'd recommend Donny Gluckstein's book that I link to my review of above. Sadly, it's out of print, but you can get it second hand via abebooks and amazon.

Lissagary’s History of the Commune is also supposed to be superb. He was active in the events and the English translation is by Eleanor Marx. Many people have raved about it. It's on my to be read pile!