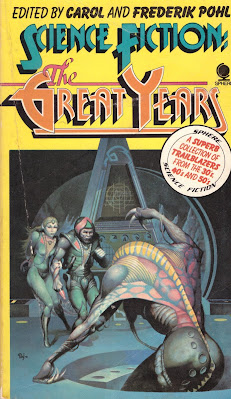 This collection of interesting science fiction is an insight into early pulp fiction, the editors deliberately choosing fiction that stood out from the rest. Frederik Pohl was a well known author, and he collaborated on this collection with his wife Carol, who says she had little knowledge of science fiction by Fred asked her to collaborate so that she would chose stories without any "sentiment about the old days". The result is a slightly eclectic collection of interesting stories that today seem slightly staid, but that's because so many of these were ground breaking works that set the tone and created some classic SF tropes.

Of the seven stories, a couple stand out. William Tenn's 1953 classic The Liberation of Earth is an entertaining account of how Earth's inhabitants cope with repeated "liberation" by far advanced alien civilisations who are themselves at war with each other. It's funny, cynical and if it hadn't been first published in 1953, I would have assumed it was commentary on the Vietnam War. In places it betrays its roots in early fiction of the 1930s, the alien Troxxt are "truly wormlike in form", but at other points it feels remarkably modern, as when the remaining humans remember that they were "helping to make the universe safe for democracy".

I also enjoyed C.M. Kornbluth's The Little Black Bag from 1950. An future accident with a time machine allows a medical kit to go back in time and a struck-off, alcoholic doctor gets hold of it and is able to do medical miracles. I was expecting a very different ending to Kornbluth's dark tragedy - but found it very entertaining. Kornluth's story and several others also give a sense of some preoccupations of the first half of the decade. A couple refer to the poverty, alcoholism and homelessness of America during the depression. Others are imbued with contemporary, mistaken, science. Old Faithful from 1934 tells the story of an alien on Mars communicating with Earth. Mars is covered in canals, short of water and with an aging civilisation on the brink of collapse.

The last story I'll mention is And Then There Were None (1951) by Eric Frank Russell. I've always enjoyed Russell's stories and can't remember reading this one. It's a fascinating combination of what Frederik Pohl calls, "out-Randing Ayn Rand" while injecting heavy doses of the non-violent resistance à la Gandhi. Except this is set on a planet that's been out of contact with Earth for many decades. It is a clever story, that mixes politics with entertainment.

Few of these stories are rare, and together they are a nice, if unchallenging collection. Fans of the genre will almost certainly have read some of them before, but dig this out for some classics. You can see some of the magazines they first appeared on this website here which also has a full index. The introductions from the Pohl's are more a glimpse into world of the science fiction community than analysis of the stories themselves, but they do contain entertaining bits, including the amusing info that their daughter was looked after by the musician John Cage during poker nights. Presumably he sang her to sleep very quietly indeed.

Posted by Resolute Reader at 11:18 am