Frederick Engels - The Origin of the Family, Private Property and the State 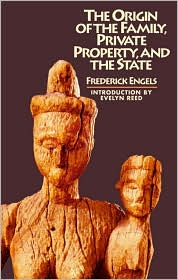 Frederick Engels' book, The Origin of the Family, Private Property and the State was an incredible achievement. It shows Engels' and Marx's fascination by every aspect of human life and history. Engels shows a deep knowledge of his subject, which while dated by today's understanding, must have meant he was at the forefront of contemporary anthropological work.

Origin is an attempt to demonstrate that the way in which human society is organised has radically changed through the years. Human's haven't always lived in a society that is based on competition, earlier societies, particularly those we would now call hunter-gathering communities, were Engels argued based on primitive communism. In these there was no private property of land or materials and this meant that human relationships were based on eglatarian principles.

Engels' starting point for much of his work are the writings of Lewis Morgan, who was the first person to propose a stagiest history for humans, arguing, based on his understanding of langugages around the world, that people tended to follow a particular set of social organisations through the centuries. These three stages, savagery, barbarism and civilisation had with them a particular set of social organisations, particular those to do with the family and marriage.

Engels is particularly keen to show that the subjagated position of women under capitalism, was not something that was always true. He writes "That woman was the slave of man at the commencement of society is one of the most absurd notions that have come down to us from the Enlightenment".

Engels, following Morgan, writes that the modern family arises as part and parcel of the development of private property relations. Because in the first instance, material objects (such as tools) and the produce of agriculture end up in the hands of males in society (due to the division of labour that takes place as women take on the primary role of bringing up children) this leads to the male lineage becoming important for the inheritance of wealth. This then, for Engels is the world historic defeat of the female sex. It is also a defeat for males to, as it creates a situation were no one can be happy. Engels is at his best when he demonstrates, that we live in a world were monogamy is held up to be the ideal, but is not the reality (particularly for men) and this situation will continue until the means of production are once again held in common - and the individual family ceases to be the basic economic unit in society.

Much of the central arguments of Engels work, on the social relationships between people in ancient societies and their languages can be shown to be flawed. But this doesn't invalidate the central themes of his book, that the rise of class societies and the associated move towards private property leads to radically different family relations.

The section on the state is the most useful here. Engels shows how the state machinary develops as classes arise, with the needs of one group (the ruling class) to protect its interests and its wealth. Engels contrasts the complex machinary of the state, with its police and judges and so on, with the "child like simplicity" of earlier societies that needed no such armed bodies of men. This state, Engels argues needs to be smashed and placed in a musuem alongside the "spinning wheel and the bronze axe". This will require a revolution in property relations, and the creation of a world which holds the means of production in common.

This new world would bring with it the emancipation of women. Only when women are able to take a full part in production within society will they truely hold an equal position in society - in other words, when women are free to do what they want, because of socialised childcare, because of full access to abortion and contraception and because they are not held back by artificial social constructs like the family under capitalism.

Engels work is still inspirational, if a little complex at times. It's worth perservering with, because it is the first real attempt by a Marxist to grapple with some of the complex questions thrown up by human history. If you get a copy, it's worth finding an edition that has an introduction that takes up some of the anthropological questions and develops these. The Marxist anthropologist Eleanor Burke Leacock wrote an introduction that did this, though I am not aware that it is in print. Part of it was reprinted in her collection Myths of Male Dominance, which I will review shortly. It is also mostly available here at Google Books.

Engels - Socialism: Utopian and Scientific
Marx and Engels on the Population Bomb
Engels - The Condition of the Working Class in England
Dee - The Red in the Rainbow - Sexuality, Socialism & LGBT Liberation

Hunt - The Revolutionary Life of Friedrich Engels
Posted by Resolute Reader at 2:20 pm

I've just recently begun delving into this subject matter and was elated to find your blog! I'm not an avid reader, however I'm going to do my best to read a few key books related to womens' role in society and how the discovery of oil, capitalism, and an over-abundant male population has led our world to an irreversable state of degradation. I ordered Mary Daly's book, "Amazon Grace: Re-calling the Courage to Sin Big."

Looking forward to your next post, and excited to travel through your journey of books over the past 6 years! Thank you for sharing your reads!! :)

Actually that is just what I was thinking. I jumped over from The Unrepentant Marxist. Really like the site. Great to have someone review books I plan on reading, with a Marxist critique!

Thanks to both of you for your kind words.

The goal of common ownership of the collective product of labour has to include the desire for equal political power amongst all men and women or it will become a fools' paradise.

Excellent review. Its been a while since I read Origin, I think I need to read it again,in this age of the internet.

I see a close parallel between Jared Diamond, video, Guns, Germs And Steel and Origin, and wonder if Jared arrived at his ideas independent of Engel.

A paragraph that helps me understand our present class divided society is this from Origin: Quote

"The increase of production in all branches – cattle-raising, agriculture, domestic handicrafts – gave human labor-power the capacity to produce a larger product than was necessary for its maintenance. At the same time it increased the daily amount of work to be done by each member of the gens, household community or single family. It was now desirable to bring in new labor forces. War provided them; prisoners of war were turned into slaves. With its increase of the productivity of labor, and therefore of wealth, and its extension of the field of production, the first great social division of labor was bound, in the general historical conditions prevailing, to bring slavery in its train. From the first great social division of labor arose the first great cleavage of society into two classes: masters and slaves, exploiters and exploited."