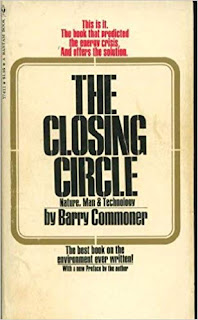 Imagine a book that is written by a left wing scientist who is actively engaged in work with non-scientists to challenge environmental degradation. Imagine it is written in an engaging style, that explains complex ecological arguments clearly. The book highlights the impact of our economic system on the environment and how that then impacts negatively back on us. It challenges other popular explanations for environmental destruction - over-population and consumerism for instance, because it emphasises the way that the profit motive and the blind accumulation of wealth under capitalism destroys our ecosystems. This book offers a radical, but straightforward solution to contemporary environmental problems, but warns that without rapid and urgent action to transform the economy, humanity will find itself in a dangerous place. Its a book written to inspire collective action and social change through informed, politically engaged, social movements of citizens.

Its a book that could have been written today, but here I'm referring to a book first published in 1971 by Barry Commoner. In the 1970s The Closing Circle was a radical antidote to much of what passed for comment on what we now see as the first wave of environmental concern. But in finishing it I was filled with an, albeit brief, feeling of despair. For almost fifty years we've understood how capitalism is destroying our ecological systems and many people (Commoner's book was a best-seller at the time) understood exactly what was needed; but the environment is still being destroyed in the name of short-term profit.

Commoner begins with an overview of the science of ecology. He argues that one of the problems in trying to understand environmental destruction is that most scientists approach the issue in a reductionist way. Reductionism he explains, is "the view that effective understanding of a complex system can be achieved by investigating the properties of its isolated parts", but this is "not an effective means of analysing the vast natural systems that are threatened by degradation".

In contrast, and in possibly his most famous contribution, Commoner offers the reader four laws of Ecology. His first law, everything is connected to everything else, immediately shows why a reductionist approach is wrong. The second, everything must go somewhere is almost a restatement of the first law of thermodynamics, but applied to substances, rather than energy it points out how everything put into a system has an effect. His third law, nature knows best, is in my opinion his weakest argument. Commoner says himself it's the one that will get the most "resistance" because it "contradict[s] a deeply held idea about he unique competence of human beings". For me this isn't the problem - the real issue is that nature doesn't "know" anything. It operates and acts, but not in any conscious way. To be fair to Commoner he is making a wider point that biological entities and systems are the result of millennia of evolution, and that outside changes effect them negatively. Finally there is no such thing as a free lunch is both a return to thermodynamics and the obvious point that additions to systems are required for changes. Commoner puts it better than me:


Because the global ecosystem is a connected whole, in which nothing can be gained or lost and which is not subject to over-all improvement, anything extracted from it by human effort must be replaced. Payment of the price cannot be avoided; it can only delayed.


Using this framework, Commoner examines how post-war society destroyed the environment. He makes the same point that any serious observer of the capitalist economy highlights: "all modern economic systems are designed to grow by means of such self-generated expansion". While not a Marxist he was clearly aware of Marx's writings and in several places like this has either borrowed or independently come to similar conclusions. Writing about agriculture he argues that "once removed from this [ecological] cycle, for example to a city... bodily wastes are not returned to the soil but to surface water, the human population is separated from the ecosystem of which it was original a part". Marx, famously, used exactly this to develop his idea of a metabolic rift between society and nature in his own work.

Several contemporary environmental issues take up some space here - the question of smog, air and water-pollution and potential consequences of sonic booms from supersonic aircraft. In each case he demonstrates how these arise (and exponentially grow) out of the particular changes to the US Economy in the post-war period. I was, here, reminded on several occasions of discussions around the Anthropocene and locating its start in the same period. But what was special about this period according to Commoner. Firstly he makes his position clear:


I believe that the [environmental] crisis is not the outcome of a natural catastrophe or of the misdirected force of human biological activists. The earth is polluted neither because man is some kind of especially dirty animal nor because there are too many of us. The fault lies with human society - with the ways in which society has elected to win, distribute and use the wealth that has been extracted by human labour from the planet's resources.

The quest for profit, in Commoner's view, leads to the adoption of technologies that maximise profit and usually do so, he argues, at the expense of the environment: "There is evidence that a high rate of profit is associated with practices hat are particularly stressful toward the environment and that when these practices are restricted, profits decline."

While Commoner associates socialism with countries like the USSR, and notes their own environmental problems, he does also argue that a planned economy would allow societies to deal with the consequences of environmental destruction far better than an anarchic capitalist one. More importantly Commoner notes that Marx's theory (the ideology behind socialism as he says) certainly does envisage a society in balance with the natural world. Commoner's own solutions are based around fiddling with the economy to make environmental consequences part of the costs of production. But Commoner is very clear that it is the specific nature of capitalism as it stands that is the problem. Solving the issue, he says, does not mean


the people of industrialised nations will need to give up their 'affluence' as judged by conventional measures... is itself an illusion. To a considerable extent it reflects ecologically faulty, socially wasteful types of production rather than the actual welfare of individual human beings. Therefore, the needed productive reforms can be carried out without seriously reducing the present level of useful goods available to the individual.

There are, however certain luxuries which the environmental crisis... will I believe force us to give up. These are the political luxuries which have so long been enjoyed by those who can benefit from them: the luxury of allowing the wealth of the natural to serve preferentially the interests of so few of its citizens... etc.


It is thus a specifically revolutionary alternative Commoner is offering, as it is one that challenges the very dynamics of the capitalist system. Commoner is clear on the need for an informed mass environmental movement. In fact some of the most interesting historical bits of The Closing Circle are those that show how scientists like Commoner and citizen movements have won real environmental changes.

Reading Barry Commoner's book I wished I had read it years ago. For many of those reading it in the 1970s it must have been inspiring. By rooting his understanding of the contemporary environmental crisis in both ecological science and a radical critique of capitalist society his work is inspiring. He also makes it clear that solving the problem required an urgent struggle for change. Sadly that did not happen, and fifty years later the environmental crisis has reached an acute point. One that Barry Commoner warned us would raise the very survival of humanity. It isn't too late to act, though time is now very short, and works like The Closing Circle remain an important contribution to our understanding of the struggle we need.