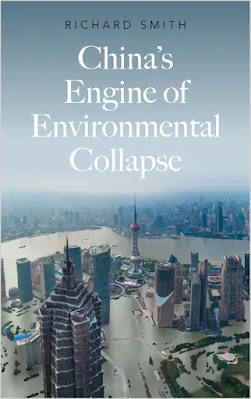 Richard Smith's recent book China's Engine of Environmental Collapse has provoked discussion on the left about the scale of the ecological crisis in China, and how the Chinese government is responding. It is a measure of the importance of the discussion that the book is being debated, and so I felt I needed to engage. Several years ago Socialist Review magazine published a shorter piece by me on China's environmental crisis, and I was keen to see how that stacked up against Smith's study of the crisis in China.

The first thing to say about Richard Smith's book is that it is detailed. He documents an environmental tragedy in China which is taking place on an enormous scale. The geographical size of China, its huge population and the scale of its economy mean that numbers are often staggering. To take a few examples Smith uses from the early pages of the book. In 2013 the Chinese Ministry of Land and Resources "conceded that three million hectares of farmland, an area the size of Belgium, was 'too toxic to farm." In 2016, 80 percent of "tested  water wells across the North China Plain (home to 400 million people) were 'so badly contaminated... to be unsafe for drinking or home use". In terms of the greatest threat to the global environment, climate change:

China is "by far the leading driver of global climate collapse" concludes Smith.

Smith argues that there are two key problems to understand why an allegedly socialist country is so environmentally destruction. The first is development. China has compressed industrialisation into a period of 30 years which took the US a century. The second is that the nature of Chinese society makes it impossible for its ruling class to enforce their environmental laws. The economic model is driving production for the sake of production - particularly of infrastructure like damns, high speed rail and urban areas. China is, according to Smith, a "highly organised and effective developmental party-state that could not only furnish labour and control labour costs, but could also clear land and concentrate resources" to drive forward economic development.

Regional heads of government hope to attract investment by the constant expansion of infrastructure. Manufacturing can take advantage of low wages and appalling working conditions to maximise profits and the inability to enforce environmental laws means that pollution, waste disposal and emissions are effectively unrestricted. Even "green" development, such as the building of solar farms etc, is often ineffectual because the energy isn't connected to the grid, not maintained or built in unsuitable areas, simply to attract centralised funding.

It's a terrifying picture, and the greatest strength of Smith's book is to open our eyes to the environmental catastrophe in the country. Should Chinese economic development continue it will bring enormous disaster. There are, for instance, no sustainable ways to meet the rising demand for electricity in China.

Why does this happen? As I said Smith is trying to explain why such a highly centralised state, with dictatorial powers, is unable to curb pollution. Here Smith says that the problem is that the particular nature of the Chinese bureaucracy is at fault. Discussing the Chinese Premier, Xi, he says

Xi's limitations begin with his comrades and nominal "subordinates"... Xi cannot systematically compel subordinate officials to stop squandering resources and polluting the country and the planet, because, for all his nominal authority as head of the most powerful police state in history, in reality power is widely shared through the 90-million-member ruling Party .This means that most of the time he can't force subordinate officials to give up their ruinous practices when to do so would undermine their economic interests.

Xi is "powerless" Smith argues, to alter the "systemic growth drivers" which are "if anything more powerful and more eco-suicidal than those of 'normal' capitalism in the West".

On the same page, Smith continues,

Xi's overrising concern, like that of Mao and Deng Xiaoping before him, is not to build and ecological civilisation, but to make China rich and power, to restore its "greatness" to "catch up and overtake the US" and become the world's leading superpower. Like Stalin and Khrushchev, Chinese leaders have always understood that in the context of a hostile global imperialism, economic and military parity, if not superiority, are the only guarantors of power. The Soviet Union was doomed by its failure to win the economic and arms race with the US. This lesson was not lost on Xi. As China itself became deeply enmeshed with, and dependent upon, global capitalism, it became vulnerable.

Here, while trying to show the speciality of Chinese bureaucratic rule, I actually think that Smith shows how much China's ecological destruction is the result of its integration into the world, capitalist, economy. In fact, I think it's clear that the dynamic of production in China is very similar to that operating (and destroying the environment) elsewhere in the world. For instance, when discussing how urban development allows mayors to get rich Smith says,

The real "miracle" in urban China is that mayors don't just get rich once off this theft. In many cities they've turned their monopoly of power and property into a perpetual motion machine of dispossesssion-demolition-construction-dispossesssion-demolition-construction on the same piece of land, with all the dislocation, waste (and profit) that entails.

Its difficult to see how this differs from the accumulation for the sake of accumulation that marks production in the rest of the world, even if the specific example might seem unlikely (though maybe not impossible). Thus it seems to me strange, and a distraction, that Smith constantly tries to hunt out differences between the Chinese and capitalist ruling classes to prove a point. He writes that

Beijing can't systematically enforce its writ against resistance from below because it can't systematically fire insubordinate bureaucrats. They're not just employees like in capitalism,. They're Communist Party cadres, members of the same ruling class the leader ins Beijing, and do they are not powerless themselves.

Smith concludes that the problem is the "collectivist nature" of China's ruling class. This seems to me to let the economic system off the hook, and by extension downplay the role of China in the global economic system and its environmental destruction. Recently I read Tony Cliff's State Capitalism in Russia. There Cliff argues that the nature of Russia's behaviour arose out of its position in a wider economic system in competition with the West. It wasn't the specific organisation of Russia's ruling class that was the problem - but what those rulers were made to do by economic realities. I think the same is true of China today.

Nonetheless I do agree with Smith's conclusion. Tinkering with the market and China's system will not solve the problem. What is needed is for the Chinese masses to rise up against the bureaucratic system and put in place a system of collective, democratic, ownership and control of the economy "to prioritise the needs of society and the environment". Richard Smith doesn't see the Chinese workers as the problem, rather they are the solution. It's this, combined with his expose of the reality of China's environmental disaster makes his book a useful read and separates it off from the normal "blame China" approach of many environmental commentators.

Posted by Resolute Reader at 6:19 pm