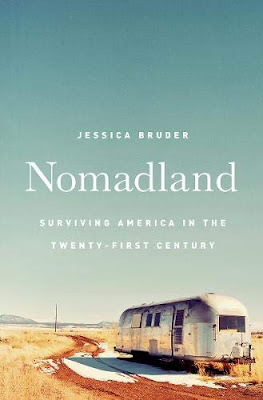 Nomadland is a remarkable work of journalism. In the aftermath of the 2008 financial crisis, thousands of Americans, and thousands more around the world, found their savings valueless and lost their jobs and homes. In a more rational society peoples homes and livelihoods wouldn't depend on the whims of bankers or an unaffordable medical bill. But under capitalism there is no reason why the closure of a plant, or the dip of a stock exchange shouldn't throw families onto the streets.

Jessica Bruder's book looks at a specific phenomena that mushroomed in the aftermath of the financial crisis - the thousands of Americans who moved into vehicles and began living through seasonal work - sometimes with Amazon, sometimes in agriculture, and sometimes in other service industries like managing camp sites during the holiday period. Many of the people who took to their vans were single, some already had experience of such a life - there is a long tradition of people in the US living in cars and moving from Walmart carpark to Walmart carpark. Most however were older, people who should have retired or were reaching pension age, who'd lost their incomes and needed cheap accommodation and work. Some employers relished using older workers - they were more reliable. The workers sometimes revelled in their status, though I tended to suspect that older workers were less likely to complain and protest at the low pay and tough conditions. More pliant, perhaps.

What Bruder manages to bring out is the human aspect of this extraordinary situation. That in the richest economy in the world, people would suddenly loose all stability in the live is a damning criticism of capitalism. But tragedies like these are always the result of many different individual experiences, and Bruder condemns US capitalism by highlighting some individual stories. But this is also a story of resilience. Of hope, of friendship and of collective organisation. That doesn't mean resistance necessarily, but communities come together to share skills, knowledge, food and dreams.

Its a work of journalism, but there is almost a level of anthropology here too. Bruder moves into a van, follows her friends and joins the gatherings. She takes a job in the beet industry, quitting quickly after the work is too painful. Few others have the choice. She highlights how Amazon and other employers manage to turn this new transient workforce into a profitable asset. The van dwellers aren't looked down upon, they are seen as a source of cheap labour and workers who will willingly subject themselves to the hard work, painful repetitive tasks and on occasion, thank their employer for money to camp cheaply. Of course this is not new. Bruder points out the phenomena of vehicle dwellers was well known in the 1930s during the Great Depression - then too capitalism adapted, selling special vehicles and finding uses for the cheap labour. That phenomena was shortlived. Today its seems permanent.

America is the wealthiest nation on Earth, but its people are mainly poor, and poor Americans are urged to hate themselves... Every other nation has folk traditions of men who were poor but extremely wise and virtuous, and therefore more estimable than anyone with power and old. No such tales are told by the American poor. They mock themselves and glorify their betters.

Vonnegut bends the stick too far, but there is much truth here. But readers looking for stories of rebellion and resistance won't find them in Nomadland, because that's not what Bruder is documenting. She's showing how American capitalism throws people onto the scrapheap, but on the scrapheap those people gather themselves together and try to organise to keep going.

Of course, all this happens in the prism of US politics. Bruder doesn't explore in great detail why there are few black people living in vans. The reality is that while the police do move people on, the mainly white van dwellers are treated relatively well compared to how black homeless people are. There's no doubt that a black couple pulling up on the side of a road and trying to spend a few nights outside a Starbucks are likely to be treated much more roughly.

Beautifully written, with empathy for the people she is writing about, and genuine warmth for their communities, Nomadland is a condemnation of how America treats working people. The subtitle of some editions of Nomadland is "Surviving America in the twenty-first century". Let's hope their collective struggles can move beyond survival and fight for a better future.

Newsinger - Fighting Back - The American Working Class in the 1930s
Wuthnow - The Left Behind: Decline and Rage in Small-Town America
Grandin - The End of the Myth

Posted by Resolute Reader at 5:20 pm