Robert Wuthnow - The Left Behind: Decline and Rage in Small-Town America 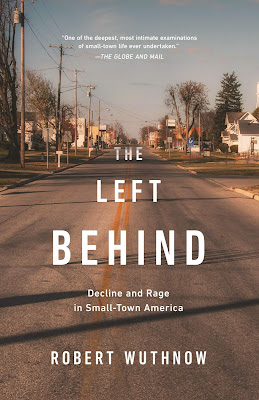 In the 2016 US election, 62 percent of rural voters voted for Donald Trump, compared to 25 percent of those in urban areas. Robert Wuthnow points of that "the smaller a county's population and the farther it was from a metropolitan area, the more likely it was to have voted for Trump". Wuthnow has been studying US rural communities and small towns for decades (he himself grew up in such a rural community) and this short book seeks to explain why a figure like Donald Trump could appeal to rural voters.

As Wuthnow says the "leading explanation for the growing rural-urban political divide was that rural people wanted change because they were suffering economically". Another reason often given is that the predominantly white population was "racist and misogynist enough... to prefer a white male candidate". As the book explains there are some truths to these answers, but Wuthnow argues that there is a much deeper explanation that goes to the heart of what small-town America is, and has experienced.

Firstly we need to see how rural America understands itself. These small communities celebrate themselves as places were "everyone knows everyone" - even though that can't possibly be true. Small town identities are celebrated and perpetuated through community "rituals" that "marked the seasons or reminded people of the town's ethnic heritages. It was a tomato festival in one community, the dogwood festival in another, an Oktoberfest in another" and so on. The towns celebrate their individual history, sporting achievements and, importantly, their community spirit. The remoteness of the towns, distances from urban areas or healthcare, for instance, fosters an independence and a reliance on each other. Wuthnow documents extensively how voluntary organisations (usually through the Church) provide essential support groups for the ill, the poor and the elderly.

Religion is important. Reading The Left Behind I was struck by how much people believed in America. Wuthnow makes the insightful point that "An outsider would probably say its [faiths] role was mostly therapeutic" but he then adds,

I came away thinking, too, that faith was perhaps more meaningful in small towns because few other options were available. It wasn't going to do much good to send letters to the governor in hopes of getting a new fiscal plan that would help. The nearest psychiatrist was probably an hour away and the best local alternative might be drugs or alcohol.

Wuthnow argues that these factors come together with wider issues - economic and political - that create a feeling for these communities that they are under threat. Their history, their way of life, the very towns themselves are threatened by outsiders, by Washington, by liberals and by forces that seem beyond the experience of many. As he explains:

The basis of small-town life is not only that it is "rural" but that it is small, which means what happens is close enough to witness first-hand and to experience intimately enough to understand and have some hope of influencing. Whether Washington was "up there," "down there," or someplace else in people's minds, it was so far away that people we talked with couldn't understand it - "so distant that I just feel helpless." And they were pretty sure Washington didn't understand them. "They're just not listening to us out here."

Whoever Washington was listening to, it wasn't anybody "small." Not the small farmer, the small-business owner or people living in small places. It was somebody "big". It was the big interests, big cities, big businesses, and big farmers... Washington was doing everything it could either to bail out or regulate big banks, but in the meantime small banks were hurting.

This is a revealing pair of paragraphs, which I think gets to the heart of the issue. Rural America feels ignored because it has been "left behind" and successive US governments, Democrat and Republican have ignored the interests of the bulk of the rural population who have been left to try and protect each other. But, it's worth emphasising, Wuthnow rejects a simple economic explanation. He calls rural people's anger at Washington a "moral outrage" because "they view the federal government's basic mode of action in recent years as an affront to their way of life".

The problem is that this sense of outrage is dominated by a bigoted view of the world. That's certainly not to say (and Wuthnow is concerned to emphasise this) that everyone in rural America is a bigot. But, he argues, that the dominate politics that shape the response is from the right. Sections on abortion politics and homosexuality show the complexities of this. Opposition to abortion is almost the only political position, so much so that people who are pro-choice or unsure are silenced. Homosexuality is less clear-cut, as 88 percent of rural Americans know someone who is gay (four percent admit to pollsters that they are gay themselves). Not everyone is on the right, though many are, but the many expression of anger comes from the right and people's "outrage" is shaped though a right-wing prism.

How might things change? Here Wuthnow offers no clear answers. Though to be fair to him its not what his book sets out to do. One thing I did feel was that the book neglects one key element that has shaped rural America's past. That's the question of struggle. There have been major political and economic struggles - of workers and smallholders - that have fought to try and make sure that peoples' wages and conditions weren't degraded. But the decline of rural industry and the nature of contemporary agriculture make these sort of movements harder (though not impossible).

The answer cannot simply be posing the Democrats against the Republicans. There needs to be a more radical set of politics - around healthcare, education, jobs and environment that is able to reach out to both the urban and rural masses and offer real hope. If this movement is to attract support it will have to make it clear on which side it stands - against the big and for the small. Without compromising on questions of political principle. Wuthnow makes it very clear that rural America is not a homogenous mass of right-wing Trump voting bigots - but a place were people feel squeezed and threatened. What needs to change is the political framework that most people experience - and that needs to come from a social movement whose starting point is that working people, in rural areas and cities, have more in common than their differences.

Robert Wuthnow's book is a good short read that I found extremely enlightening about rural America. It is short of answers - but reading it makes it clear that the answers are not easy to come by.

Posted by Resolute Reader at 9:06 pm