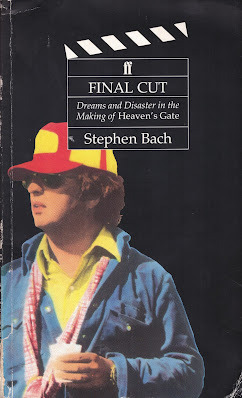 A recent watching of the full 3 hours and 39 minute version of Heaven's Gate led me into a deep dive into the history of the film. Heaven's Gate is infamous as the film that "sunk a studio", it's $44 million cost leading directly to the sale of United Artists and the sacking of most of the staff - even those who had little to do with the film itself. Heaven's Gate, in all its different versions, was a car-crash. It's troubled creation leading to a troubled release, re-cut and then re-release, which did nothing for its popularity.

Final Cut is the story of the making of Heaven's Gate, an insider account by UA's Head of Production Stephen Bach. It is erudite, unflinching, witty and entertaining. It is also not unsparing in its criticisms of Bach himself and his colleagues. But its principle enjoyment lies in the schadenfreude the reader gets watching a metaphorical car crash unfold. A few days into filming, the director Michael Cimino was famous already days behind schedule and vastly over-budget. Because the reader knows the end result, the fascination is watching how the Bach and others in the studio allow it to happen. The rich, famous and pompous are brought to their knees over a few hundred pages.

The danger with a book like this is that it's one sided. Bach makes Cimino the bad guy. He doesn't exonerate the studio, but he constantly justifies their failure to hold Cimino back. To be fair to Bach the final outcome was only one of several possibilities. Cimino, after all, had just come back from making the Deer Hunter which had won him a clutch of Oscars and vast amounts of praise. The real problem, which Bach only hints at, is that movie making is not about films, or art - its about profits and UAs inability to challenge Cimino comes as a result of their greed. They were expecting record returns and this clouded their judgement.

This is not to let Cimino off the hook. His desire for perfection, his inability to work with others, a workplace culture that stinks of bullying and arrogance all had their place. Final Cut focuses more on the Studio overview, and readers can find much more about what took place on set. Famous stories of Cimino's wasting of money, pomposity and overtime bills abound.

But I was struck how much rope Cimino was given. UA constantly worried about costs, but then seemed to be happen to write blank cheques. Their acquiescence to Cimino's repeated outrageous demands - for more time, for overtime costs and so on, make it clear that responsibility for the final disaster lies equally with UA's top brass and Cimino's behaviour.

Reading this in a time of Covid also highlighted another factor about life for studio executives in the 1980s. They lived lifestyles that seemed to match the hedonistic life of move stars themselves. Perhaps more hardworking, but flying around the globe, staying in luxury hotels and mixing with the great and the good. Its a lifestyle that seems unimaginable in a time of Covid and climate crisis. But remains a reality for the rich today (though now billionaires also go to space on a whim).

Bach's witty self-depreciating style, and his willingness to admit when he personally was at fault meant that I finished the book rather liking him and perhaps even feeling sorry for him. In contrast I came away with a deep dislike of Cimino, a man who clearly had talents, yet squandered them on pompous, self-obsessed and bloated filmmaking.

Bach shows that Heaven's Gate on its own didn't kill UA. The studio's troubles were already there, and the cut-throat world of filmmaking doesn't give much room for failure. But he does demonstrate how Cimino's self-obsessed dreams could not be contained by the style of management that UA had. It might have been good for art - but it was terrible for business. But that's the contradiction of art under capitalism.

But what of the film? Google Heaven's Gate and you'll find plenty of articles telling the reader how it has been reappraised and evaluated, and is now seen as a classic. Personally I thought Cimino's self-obsession shines through. It's a bloated, pompous film, where gorgeous landscapes drown out the story. The resultant confusion is hard to hear, hard to understand and boring. The opening and closing scenes that Bach so desperately wanted Cimino to include in order to make sure the film wasn't understood as a Western seem unnecessary, overlong, confusing and laughable. Nonetheless it's a piece of film history that ought to be watched, if only to enjoy Stephen Bach's delicious autobiography of disaster so much more.

Posted by Resolute Reader at 10:16 am