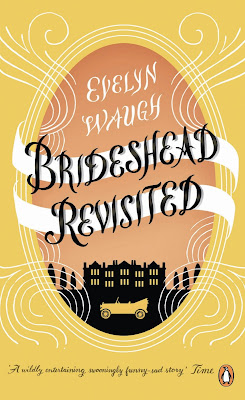 Completely unexpectedly I found myself reading Evelyn Waugh's Brideshead Revisited after it was recommended to me as the quintessential novel of the English Country House. Note that I said "of" not "set in". As regular readers of this book blog will probably realise I am not one for the classics of English Literature. Despite this, and perhaps despite myself, I found Brideshead Revisited a fascinating and enjoyable book.

Much commentary has been written on this novel so I won't waste time reviewing the plot here. You can find decent synopsises in many places on the internet. Much of it discusses the exact nature of the relationship between the principle characters - the narrator Charlies and Sebastian, the young man who he is at Oxford with, whose family live in Brideshead. Personally I think its clearly intended that they had a sexual relationship, much more than the attachment that is often ascribed to the two of them.

These debates are also had out in detail across the web, and need not detain us further. I was more interested in the way the book tells the story of the final end of the aristocracy. Famously the ending details the death of Lord Brideshead, surrounded by his family and Charles. Because Brideshead reverts back to Catholicism at his death, Charles' imminent marriage falls apart. Brideshead is very much the last representative of the old landed aristocracy, his literal death ends that story. His heir is now a commerical figure and, as if to underline all this, War with Germany - it's imminence runs through the novel's final third - is about to break out.

Brideshead the house is very much part of this. It's a massive, meandering building, that is in various states of decline. Its eventual takeover by the British Army as a training base allows Waugh to present the story as Charles' memories (though he seems to have forgotten much in the 5 or so years since he was last there). But the house is that old order - it's  a place of the landed aristocracy that could only be built and maintained by the wealth of the lands the family had. Its declining years represents the decline and power of that class.

Waugh himself was, of course, an obnoxious right-winger. He claimed that the "most of the reviews have been adulatory except where they were embittered by class resentment". Perhaps that's true. Class war is certainly a significant factor in the book - as several of the principle characters join scab forces during the General Strike and happily fight the workers. What Waugh perhaps didn't get is that the novel represents very much a particular class view. That's not to say it doesn't work as a story - it's a work of fiction that demonstrates the views and prejudices of the authors' class, which doesn't negate the novel itself. Waugh probably intended many of his characters to be sympathetic - but I found almost all of them obnoxious, and I'm not surprised that Sebastian effectively drinks himself to death. Who wouldn't?

Which, inevitably, brings me to the ending. Because Waugh fails at the climax. Rather than round the novel off in a way that works for the story itself, he gives into his own prejudices and, in an scene that can only be described as wish fulfilment, rounds off the novel with an ending that at best can be described as "flat" though I agree more with Edmund Wilson who called it "absurd".

There's much to Brideshead Revisited, not least because of the politics of its author. But as a description of the decline and fall of the last of the aristocracy I enjoyed it immensely.

Posted by Resolute Reader at 5:50 pm