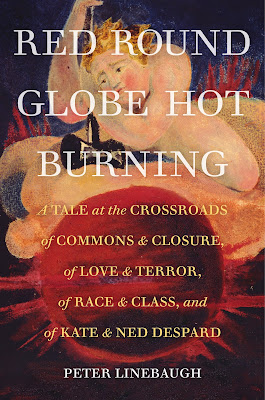 Going on the title alone a casual browser in a bookshop might assume that Peter Linebaugh's latest work is a book about climate change. The phrase is actually one from the poet William Blake, and while the book is not devoted to environmental destruction, it provides a neat link between this subject and wider discussions about the transformation of humanity's relationship to the world around us during the rise of capitalism.

The long subtitle of the book draws out many of Linebaugh's themes: "A tale at the crossroads of commons and closure, of love and terror, of race and class and of Kate and Ned Despard". Most of us who have encountered the story of Kate and Colonel Edward Despard will have done so as a result of E P Thompson's pathbreaking book The Making of the English Working Class. Their story was told further, in more detail and in a somewhat different way by Linebaugh and Marcus Rediker's book The Many Headed Hydra. In this latest book Linebaugh open's with his quest to learn more about Catherine "Kate" Despard, and to try and locate her burial place. Kate (Linebaugh insists on using familiar names for the Despards, an attempt to make them closer for the reader) Despard was a creole woman from the Carribean, who married Edward and returned with him to London where they became part of a radical plot to overthrow the government.

Readers who have read the two books mentioned earlier will know some of the biography of the Despards. Those who don't know the story will not find a straightforward historical account in Red Round Globe Hot Burning. In fact Linebaugh encourages readers who want this to seek out other works. What he does instead is to develop a revolutionary narrative that links the story of the Despards to the swirling changes taking place on the burning globe in the 18th and early 19th century. In doing so he answers a question that many people must have asked around 21 February 1803 when Edward Despard was executed - how did a man who had been part of Britain's colonial project become such an ardent critic of the state?

The answer lies in the way that capitalism was transferring the world. As Linebaugh's subtitle suggests, race, class, enclosure and terrorism were part of the new world order. Despard's role as the colonial administrator in present day Belize no doubt led him to see slavery and violence at first hand, but as an Irishman he would have already known the reality of colonial rule. The racism and raw class power on the western edge of the Atlantic opened the eyes of many to the nature of capitalism, but Linebaugh highlights another, neglected, factor - the resistance of ordinary people.

There are two aspects. One are the repeated revolts of the slaves and the resistance of indigenous peoples' to the exploitation, destruction and violence of the capitalist colonisers. This culminated in the Haitian Revolution, an "historic fury" that culminated 12 years after its start in August 1791, "in the abolition of slavery and the independence of Haiti". Linebaugh tells us that "labor was most intensely exploited, enslaved and immiserated in Haiti and Ireland" providing further links between Catherine and Edward's journey to revolution. But the other aspect to the resistance is the the fight to stop the enclosure of the commons. We are used to understanding this in terms of the class struggle over common land in England, a key feature of the primitive accumulation that Marx argues was needed to kick start capitalist accumulation.

But Linebaugh argues that there is a wider enclosure of commons that shaped the politics of the Despards and many others. The first is that represented by the classical enclosures of England, "Common right... [the] power of direct, mutual appropriation, in contrast to the exclusivity of private property". The second is the "ideal commons", the "Land of Coackaigne" or other utopian visions "not restricted to the commons of property; they described general conditions of mutuality and happiness for all". Finally there is the "commons observed", "neither real nor wholly imaginary" a "European name whose referent was to the indigenous people in contrast to European settlers". In other words the generalisation, extrapolation of the "primitive communism" seen among American indigenous peoples and reported back to others.

Linebaugh argues that "Ned and Kate experienced all three kinds of commons... They were not alone. People with experience in all three began to encounter one another during the 1790s." These encounters, produced Linebaugh says "revolutionary promise". They inspired, angered and motivated not just those who were oppressed and exploited but anyone who might look around and see injustice. Such people included Ned and Kate. The route of Edward to execution then was one travelled by many others, but he was, by no means the lone revolutionary beloved of government propaganda. He was part of a wide movement and Kate was his equal comrade. Their last hours together were spent composing his gallows' speech, agonising over the words as any writer might do at a much less stressful juncture. They were words that inspired and brought terror to the Sherriff overseeing the judicial murder.

Linebaugh's book is challenging. Its structure does not follow an easy narrative. He jumps from place to place - Ireland, the Caribbean, Africa and London. To explore his arguments he focuses in detail on obscure moments. There are many asides (sometimes many pages long) - from life in Ireland, to the minting of coins, to military sieges in South America and the enclosures in London. His language is lyrical, poetic and full of allusion and references. But this does not make the book any less scholarly or revolutionary.

It certainly was not the easiest of Linebaugh's books to read. Nonetheless it is compelling and rewarding. It reminds us that the current "Red Round Globe Hot Burning" was foreseen and resisted. Our hope for the future lies in rekindling that revolutionary burning as an answer to the capitalist destruction that Edward and Catherine Despard fought so hard against on two continents.

Posted by Resolute Reader at 8:31 pm