Mathilde Wolff-Mönckeberg - On the Other Side: To my children from Germany 1940-1945 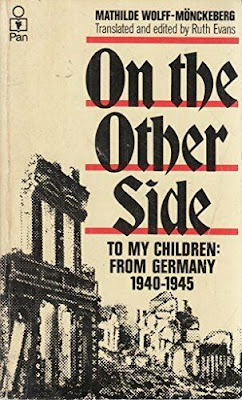 A few months ago I read Naomi Mitchison 's memoires of her wartime experience in Scotland, Among You Taking Notes. It was a fascinating combination of personal experience, political commentator and reportage. By chance I was lent a copy of On the Other Side by Mathilde Wolff-Mönckeberg. It was an opportunity to compare the experiences to very different women during World War Two, one in Germany (Hamburg) and the other in Britain.

Wolff-Mönckeberg's book consists of a series of letters she wrote to her children most of whom were uncontactable as they lived in Wales, South America, the USA and Denmark. The letters were never sent and Wolff-Mönckeberg stopped writing them when regular communications reopened in 1946. Instead they were stuffed in an envelope and not found until some years after her death. Translated and annotated by Ruth Evans, the daughter who lived in Wales, they form an occasionally fascinating but very personal memoire of life in Hamburg under the Hitler regime.

Wolff-Mönckeberg came from a privileged background. Her father was mayor of Hamburg, streets in the city are named after her relations and as a result of her two marriages she knew and worked with many important and wealthy figures in pre-war Germany. It would be fair to say that Wolff-Mönckeberg was very much an enlightenment German. Her letters are filled with quotes from Goethe's poems and books, and her second husband, and anglophile, teachers English literature through the war. Her first husband became a committed Nazi and neither she, nor the children had any contact with him. Wolff-Mönckeberg on the other hand hated the Hitler regime, and sympathised with its victims. Though she was in no way an active opponent. Interestingly one of her children became a leading Communist in South America, dying of illness during the War.

Unlike Michison's book, there is little here about politics. Perhaps Wolff-Mönckeberg was frightened of her writing being found by the authorities, though I suspect she wasn't particularly political. One gets a sense as we read of how stifling life was under the Nazis, and the fragments of news she gets are often inaccurate. Though its interesting how cynical her, and others, clearly were about news reports.

Instead much of the letters are accounts of the repeated, and overwhelming bombing raids, life in the shelters and the ongoing quest for food and resources. As the war lengthens, rationing gets worse, though I was surprised to see the freedom that Germans like Wolff-Mönckeberg did have to move around, leave the city and, most surprisingly to get the occasional letter from outside of German - often via neutral Switzerland. The reader also gets a sense of how horrific the British bombing raids on Hamburg were - they killed between 30,000 and 50,000 civilians and its hard to understand what military benefit they had.

Through the war Wolff-Mönckeberg keeps herself going by dreaming and worrying about her children. She becomes obsessed by food, and reminisces about meals and celebrations of the past at Christmas time. Those of us who think of the big political and military aspects to the war are reminded that at the same time most people continued trying to live their lives - working, worrying about family and surviving.

The most interesting parts of the book in my opinion deal with the period after the war as British troops occupy Hamburg. Far from things improving, in reality things get worse as food is increasingly short and tensions rise with the occupiers. Wolff-Mönckeberg biggest concern - how her children are, is relieved as she starts to get letters via British troops. Also in this period she begins to learn about other events - the violence of the Eastern Front and the behaviour of the Russian troops. There are a few mentions of the victims of concentration camps, but beyond a few early sympathetic comments about the Jews in the first year of the war, there is nothing here from Wolff-Mönckeberg about her thoughts on the Holocaust etc.

An interesting book, I felt it was too focused on the personal. Of course Wolff-Mönckeberg was not writing for history, but for her own sanity and her children. Yet it is striking how little she mentions wider issues. Ruth Evans' introduction and epilogue frame the letters excellently and I was moved by the account of finally seeing her mother after seven long years.

Posted by Resolute Reader at 5:41 pm