Mike Wendling - Alt Right: From 4chan to the White House 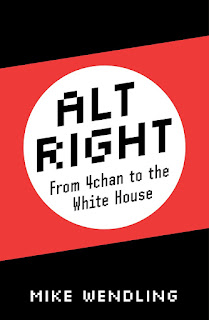 The election of Donald Trump as US President allowed a tidal wave of far-right politics to enter mainstream political discussion. Suddenly the far-right, fascists and Nazis had confidence to openly talk about their ideas. On occasion this led to violence, such as with the Charlottesville protests when Trump fanned the flames by stating that there were "fine" people on both sides of the fascist and anti-fascist protests. A white-supremacist drove a car into a anti-racist protest on that day, killing Heather Heyer, and injuring many more.

But this new "alt-right" did not come from nowhere, rather they had been growing in confidence and numbers for a number of years prior to Trump's candidacy. They represented both a new political force, emboldened and strengthened by Trump (whom they saw as 'their man') as well as an established group that had existed below the radar, usually grouped around a few blogs and websites, that had allowed them to develop their ideas and organisation (such as it is).

Mike Wendling has done us all a favour by doing the dirty work investigating the origins and individuals behind the alt-right. While an accessible work, his book is not an easy read, as the reader has to wade through a quagmire of racist, misogynist and bigoted views that often have little relationship to reality. Wendling deserves an award for this work, if nothing else, because it highlights how a large section of people think and if anti-racists are to challenge these ideas and the individuals that propagate them, then they need to understand.

At the heart of the story is an internet subculture that will be unfamiliar to many. Wendling sees the /pol section of 4chan as key to the development of the alt-right (he calls it their 'home turf'). A relatively free-flowing, un-moderated section of the internet, its style is highly alienating to outsiders, and difficult to engage with from a progressive position. From here individuals were able to build links (both unconsciously and consciously) with a wider world of "men's rights" activists, neo-Nazis, conspiracy theorists and so on. These networks are both terrifying and fascinating, and Wendling let's us see inside the mindset of those at the heart of them.

Wendling explains some of the short-hand, codes and in-jokes common to the internet base of the alt-right. Many activists just waking up to the threat from these inviduals, will find them useful for getting an understanding of their environment. But importantly he also shows how they organise and how individuals are carefully trying to shape a movement. This is particularly true of the neo-Nazis, who have learnt how to inject their politics into the wider alt-right movement. No one should see these fascists as stupid - they actually have a cleverly thought out strategy. As Wendling explains:

Hardcore white supremacists aren't joking when they express their thirst for racial confrontation. But the Daily Stormer's online blitzkriegs gave the alt-right a blueprint for trolling projects that would go beyond anti-Semitic hate campaigns....first a prominent alt-righter pinpoints a specific target. They could a politician, a journalist, or a feminist activists, l... Next the ringleaders include some version of plausible deniability. The Daily Stormer, as it dances so close to the law, is forced to routinely make its anti-violence pose explicitly. Alt-rights with big Twitter followings don't have to wage anywhere near the line of violence; simply drumming out a few rude messages will rally the troll army, For people on the receiving end of the storm, the experience ranges from unpleasant to downright frightening.


Often this spills over into actual violence. And while specific sites, tweeters and bloggers may distance themselves from those who act on their suggestions, the racist, sexist and bigotted rhetoric claims many victims.

Wendling's book is excellent at highlighting where the alt-right came from, how it has organised and the links it has made. There's also plenty here about particular obnoxious individuals. I was less convinced though that the book actually helps us understand why people become right-wing, let alone commit racist terror. There are some big questions - similar to those about why people voted for Trump - that deserve an attempt to answer. What is it about modern society that alienates people so much that they accept racist ideas? What makes people sexist, or accept deeply backward and reactionary views about women, gay people or the Jewish community? Indeed, to put it bluntly, what is the social base for fascism and why does it grow in confidence at particular points in history? Wendling doesn't really attempt to answer this, and thus he has no strategy for dealing with the far-right. In fact, he displays a worryingly blasé attitude to the alt-right following Trump's election - suggesting that they are a spent force. Nor does he discuss any of the other far-right and fascist movements operating globally. It would have been interesting and useful to explore the links between some of the people described in Alt Right and say, UKIP or the EDL/FLA in the UK, or the fascists in Hungary, Germany and France.

The problem is that 21st century capitalism fails to deliver for the vast majority of people. A tiny minority live in unparalleled luxury, while the majority are denied decent jobs, homes and education. At the same time governments, even ones that are nowhere near as right-wing as Donald Trump,  are happy to play the race card, or scapegoat Muslim people or migrants, in order to divide and rule. Across the globe far-right organisations and fascist parties are making inroads into government, as well as strengthening their fascist street movements. They need to be opposed by mass anti-racist movements and we need to have struggle for better housing, jobs and education - through challenging the system that uses racism and bigotry to divide and conquer.

Paxton - The Anatomy of Fascism
Guerin - Fascism and Big Business
Lipstadt - Denying the Holocaust
Posted by Resolute Reader at 9:25 pm