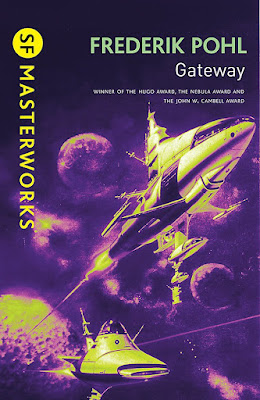 Frederik Pohl is a remarkable novel, but there was a fatal problem with it that I will mention in this review. This is, essentially, a spoiler, so stop reading here if you don't want to know a key plot element.

In the distant future the solar system has been colonised, but one most of the inner planets working people struggle to survive in appalling conditions of over-population, low wages, synthetic food and very low income. Robinette Broadhead is a miner, but has dreams of escaping and one day wins the lottery. With his cash he buys a trip to Gateway and signs up to be an explorer using the alien spacecraft there. Years before humanity discovered this hollowed out asteroid which contained hundreds of alien craft. The technology was barely understood, yet using the spacecraft could take their crews to far-off stars, solar systems or even outside the galaxy. At these destinations there might, and the emphasis is on might, be technology that could make the crew richer and the company that runs Gateway even richer.

But some of these destinations are lethal - perhaps the edge of a supernova or black hole, or they might need travel time in excess of the air and provisions that people like Robinette could take with them. Essentially its a gamble, but in the overcrowded, poor future, its the only way to make real wealth for those from a lowly background. So Gateway attracts those who are desperate, or hoping to turn a small amount of money into extreme wealth.

Gateway is tightly controlled. Air, water, food costs money and potential crew must pay their bills or risk being kicked off the asteroid. Despite this, the unknowns about the flights keep Robinette from flying until he can no longer put it off.

Gateway is a carefully constructed novel. Alternate chapters look at Robinette's interaction with his electronic shrink, trying to come to terms with some disaster that takes place, we understand, during his time flying from Gateway. The other chapters follow Robinette's adventures, his love life, partying and life on Gateway. Between these alternating stories we find extracts from Gateway's rule book and workers' contracts, small ads and reports from other missions. Some of these are automated as they describe the destruction of crews.

Its an excellent premise for a science fiction novel and Frederik Pohl brings to two parts of the story together very elegantly. But something soured the whole book for me which was when Robinette beats up his girlfriend. She leaves him, but then returns and professes her love. Its an unpleasant moment in an otherwise interesting novel. It's unclear why the author put the scene into the book as later it seems as though it never took place. I don't recollect any other science fiction of a similar era, or even by Pohl that has similar scenes and it left me feeling extremely unhappy with how the author seemed to be portraying women.

The strange moment distracted from a fascinating concept. Pohl was of the left - he'd been a Communist Party organiser in his youth, and his anti-corporate politics comes through in this, as in other science fiction classics written by him alone and in collaboration with others. Gateway is certainly a classic - though its gender politics date it a great deal. The concept of Gateway the asteroid, the unknowns that pepper the story and the interesting structure to the book make it a compelling read. This must be a key reason it spawned several sequels. Though, as I say, I was left feeling extremely discomforted by Pohl's insertion of a violent assault by his male character on his partner.

Posted by Resolute Reader at 10:10 pm