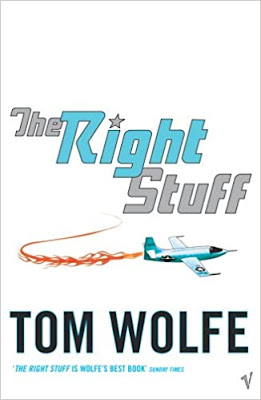 When I was a space-obsessed teenager in the 1980s I loved The Right Stuff film. I watched it multiple times glorying in the realistic portrayal of the space and the US test pilot programmes. During one of 2020/2021's lockdowns I rewatched it and found it as breath-taking as I remembered. But this time I was taken by the story itself - not just the bravery of the men but also the links between the space programme and politics. This is, of course, not a new story, but it was done well in the context of the film.

So I was determined to read Tom Wolfe's book on which the film was based. Wolfe's The Right Stuff is a classic of the genre, alongside Norman Mailer's account of Apollo 11, both read today more as literature than as historic records. Wolfe's book takes an unusual angle. It focuses on the Mercury programme, the US's panicked response to the Soviet Union's success in space. An attempt to put the first person in space and make sure he [it was always a 'he'] was America. In this the programme failed and the early US rocket launches were marred by failure and humiliation.

Wolfe however focuses on the individuals, and particular the rivalry between the test pilots who were considered to be actually flying their high-velocity, high altitude planes and the astronauts who were simply passengers. It's a compelling tale and Wolfe tells it extremely well - his lyrical prose is filled with call-backs to earlier comments as his central theme of "the Right Stuff" holds the book together. Wolfe's concept of the Right Stuff is worth dwelling on. He describes it as an essential feature of the pilots at the top of the military tree - the test pilots who survive the elimination process of recruitment, promotion and the dangers of flying. It is more than chance, skill or style - though all of these have their role. It's an ethos that is supposedly inherent to the pilot, something jealously guarded and only those who know, know.

It's also bollocks. Wolfe demonstrates plainly that the pilots who had the Right Stuff had it because they had skills, didn't die accidently and made it through a vigorous training programme that sorted precisely for men life them. But these few men did manage to create an aura around them - of power, bravery and machismo that caught the attention of the press and public. In Wolfe's telling it also led to intense rivalry between the space and test pilots, particularly among the later who considered the astronauts lacking in the Stuff. The astronauts, by contrast, were desperate to prove themselves - doing so, eventually with Wally Schirra's flight where his skills saved the mission and proved the essential role of the astronaut.

The fascinating thing about the US and Soviet space programmes (and indeed the military side of things) was that the most visible men were literarily at the top of an enormous pyramid of people and machines. Wolfe's telling of the story focuses on a handful of these men, and sidelines (deliberately so) the role of almost everyone else. A handful of figures get to stand in for these - the male and female doctors who are given comic roles to highlight the seriousness of the astronauts are a classic example. The reduction of the space programme to a few brave individuals who supposedly have the "Right Stuff" obscures a much more fascinating story. That's not to say there isn't stuff of interest - the book reads like a dream and Wolfe shows how the astronauts were pawns in a larger game, but charmingly unable to cope well with fame and fortune that followed.

I enjoyed The Right Stuff. But ultimately it felt like Wolfe set out to write a parable, not a history and it tells only a partial story. That said it gives a flavour of the excitement of the early space programme - but only hinting at a bigger story.

Posted by Resolute Reader at 9:57 am