Peter Linebaugh - The Incomplete, True, Authentic and Wonderful History of May Day 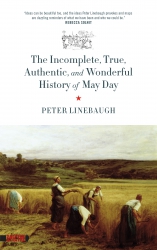 Peter Linebaugh's writing is always wonderful. His easy, lyrical style that seemingly plucks randomly from the history of humanity's struggle against oppression and exploitation, always builds up to a powerful statement of the need for radical change. This short collection of his essays around the theme of May Day is a great read that celebrates our historic struggles, but also Linebaugh's own involvement in the building, and rebuilding, of the left.

In here is the story of the Haymarket martyrs, who were framed for a bomb thrown in Chicago during militant protests that terrified the local ruling class. "Make the raids first and look up the law afterwards" said the Sheriff, and on "Black Friday" November 11, 1887, four innocent men were hung.

Here are also the stories of the immigrants who fought, protested and struck for the right to be properly paid for their labour and the right to dignity at work. The struggles of indigenous peoples, from the Native Americans to the Zapatistas. Here are also Frederick Engels, Karl Marx, Lenin, and Rosa Luxemburg, who Linebaugh quotes on May Day thus:


The brilliant basic idea of May Day is the autonomous, immediate stepping forward of the proletarian masses, the political mass action of the millions of workers.

Linebaugh criticises Engels for neglecting, in his great work, Socialism: Utopian and Scientific the struggles and existence of the indigenous peoples, but goes on to celebrate Engels for recognising that "the preservation of the commons depends on an international struggle". Such gentle and powerful criticism is a hall-mark of Linebaugh's writing. The final essay collected here is Linebaugh's retirement speech from his university. A powerful denunciation of neo-liberal destruction of education, libraries and books. A celebration of workers who built the university, their struggles and an explicit call for revolution. How the Dons must have squirmed in their seats, and how understated is Linebaugh's comments on his own contribution to the struggle, to scholarship and to education.

One of those who died for the Haymarket events, August Spies, said "There will come a time when our silence will be more powerful than the voices you strangle today". We still wait, and struggle, for that time, but we don't forget those who went before. As Linebaugh finishes, "let the sober vow be recognized again, to unite with the workers of the world. We have the World to gain, the Earth to recuperate".

Buy this book - from your local radical bookshop, not from a multinational - and enjoy Linebaugh's trip through the history of May Day and then rise, refreshed, to fight again.

Happy May Day everyone. Solidarity.