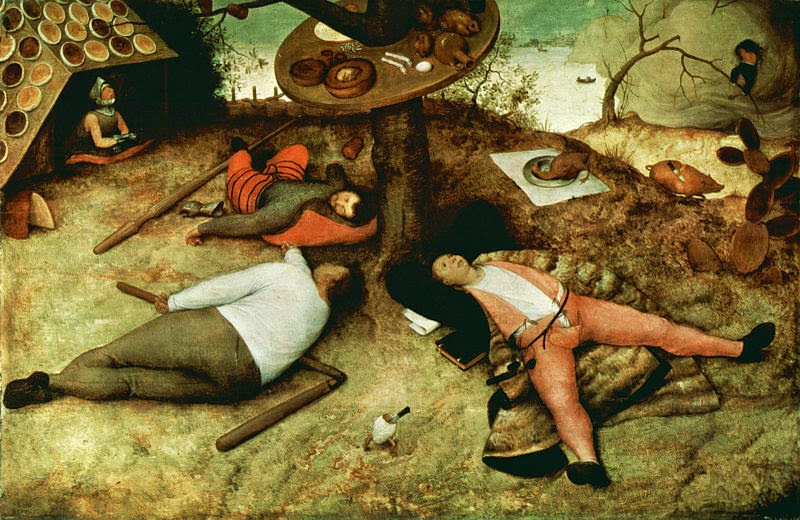 One of Pieter Breugal's most memorable paintings is Het Luilekkerland, known in English as The Land of Cockaigne. It portrays a mystical landscape full of wonderful foods. A pig runs by ready to eat, a knife stuck in its back. An egg walks past on tiny legs, a spoon already inside. A nearby house is roofed with tarts and the fence is made from sausages. Three figures lie on the floor stuffed with the food that exists in vast quantities around them.

In Omasius Gorgut's book we discover that these motifs are often repeated in poems and songs that originate across much of medieval Europe. This shouldn't be a surprise of course; for the peasants who made up the majority of feudal society, hunger and food shortages were a regular reality. It is no surprise that the serfs dreamed of a land of laziness, abundant food and lacking in work.

In Cokagyne we drink and eat
Freely without care and sweat,
The food is choice and clear the wine,
At fourses and at supper time,
I say again, and I dare swear,
No land is like it anywhere,
Under heaven no land like this
Of such joy and endless bliss.

It isn't simply food though.

All day, there is no night
There no quarreling nor strife,
There no death, but endless life;
There no lack of food or cloth
...
In bed or garment or in house
There's neither flea nor fly nor louse.
Neither thunder, sleet nor hail,
No vile worm nor any snail

It is not hard to understand why serfs and peasants might tell these rhymes to each other! Gorgut's short book explores these myths, though the author sees them as far more than idle dreams. In his view they are part of a long tradition of rebellion and resistance that exists below the surface of medieval history. For in these poems, the dreams and aspirations of the poorest class are writ large, and often they contradict (or can be contrasted to) the official Utopia - the Christian heaven, portrayed as dull and boring.

The celebration at the heart of the Cocaigne myths - the dancing, good food and sex is linked in wider feasts and carnivals. The Church hated these, and Gorgut gives some fascinating and hilarious examples of medieval celebrations (even ones within the abbeys) that poked fun at official worship. Gorgut points out that

"The Church was constantly fighting a battle... it had to walk a fine line: the promise of a better egalitarian future under Jesus was necessary to keep people from rebellion, but just the concept of such a perfect existence was a clarion call to people ravaged by famine and disease, ground down by poverty."

So the various poems and songs (many of which are reprinted here in the appendices) were part of that tradition of rebellion and may well have been used to inspire, in the way that John Ball's sermons and prayers did for the Peasants Revolts.

Gorgut brings the story up to date. The words of Cockaigne clearly were passed down from generation to generation. While the carnivals were ended and the celebrations became more controlled, that there are clear similarities between medieval poems and more recent poems, ballads and songs demonstrates that the dreams didn't die.

Gorgut's book is excellent both at telling the story of the various versions of these poems. But also at examining the individuals linked with them and the wider social changes taking place. The author also looks at other contemporary analyses of the myth of Cockaigne, finding them useful, but wanting.

The editors point out, and I have to agree, that Gorgut fails to explain the role of women in these visions. They are all to frequently portrayed as playthings for men, or at least having no objection to male advances. Apparently a later edition of the book will tackle this question.

This is a very useful book for those that want to understand the hidden history, far from that of Kings and Queens, of European feudalism.