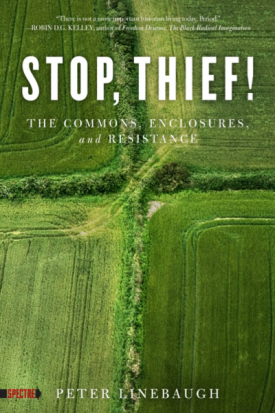 Peter Linebaugh has been one of those historians who over the last few decades has rescued the history of some of the most marginalised and forgotten people. In particular he has looked at those who were side-lined or lost their livelihoods (not to mention lives) in the earliest days of capitalism. In this volume of essays, Linebaugh examines the way that as capitalism developed, there was an associated transformation in the way that the majority of the population could live and work on the land. In particular, this
frequently meant the destruction of common rights, the enclosure of common land and the creation of new laws to criminalise old activities. Linebaugh notes, for instance, that alongside enclosure (the "historical antonym and nemesis of the commons") there was a "massive prison construction program".

That capitalism destroys old customs to improve the ability of a small group of individuals to better make themselves wealthy should be no surprise. Linebaugh quotes no less a figure that J.S.Mill, "a world with nothing left to the spontaneous activity of nature with every foot of land brought into cultivation... and scarcely a place left where a wild shrub or flower could grow." to aptly capture those who thought that nature would be utilised in the interest of society, controlled, shaped and driven in the interest of commerce and social improvement.

But the rights that people had. To collect fallen wood, or hunt rabbits, or glean the fields after harvest, were not granted from on high. They had been fought for an won by generations of peasants. Their removal thus was brutal. But it was also resisted. From Wat Tyler, to the "Luddites", Peasant Revolts and the Iroquois, people resisted losing their lands and rights. It was a losing battle, but it was a struggle that helped shaped a vision of a different world, as well as opening eyes to the nature of the system.

Two chapters in this collection deal with those who learnt from these struggles and envisaged a world with a new "commune". One is on Marx, whose early radical journalism was in part a reaction to his anger at new laws that criminalised the right of peasants to collect wood. The second is on the socialist William Morris, whose writings are sometimes dismissed as overly romantic socialism, harking back to a time that never existed. But Linebaugh however, in a essay that serves as an introduction to E.P. Thompson's biography of Morris, sees Morris as a socialist who saw the world, not as an abstract nature, but one that should be used and enjoyed for the benefit of all. He quotes Morris,

"The Communist asserts in the first place that the resources of nature, mainly the land and those other things which can only be used for the reproduction of wealth and which are the effect of social work, should not be own in severalty, but by the whole community for the benefit of the whole."

Morris' activism, his tireless speaking tours and writing thus become an extension of this vision. Not an abstract dream, but an object to struggle for.

On occasion, Linebaugh comes close to romanticizing the past himself. But he understands that the struggle to protect the Commons was that of the poorest fighting for what little they had. That struggle was brutal, but so were their lives. He recounts the story of a "Mr. Samuels" who "lost his hand to a mechanical coconut shredder" and so his friends and fellow villagers burnt the "pumping station" in revenge.

Linebaugh sees such struggles as in a continuum with today's battles to prevent further erosion of our rights. For this author, the struggle for a new commons, is as important as the fight to protect what we have and had.

Peter Linebaugh's writing is filled with passion, forgotten histories, and literary quotes. Here are Shelley and Wordsworth, Frankenstein's monster and the words of miners, peasants and all those men and women who've struggled at the bottom of the society.