Patrick Bond - Politics of Climate Justice: Paralysis Above, Movement Below 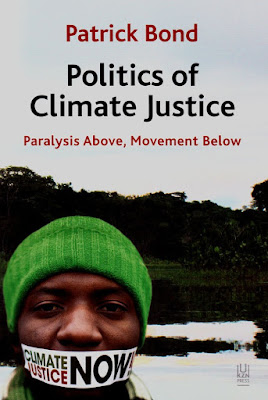 The COP26 conference takes place in Glasgow this November, postponed by Covid-19 from 2020. Already British politicians are hyping the event, keen to cover themselves in a reflected green glow. British Prime Minister Boris Johnson said back in March 2021:

The COP26 summit is one of the single biggest priorities that any government could have domestically and internationally and it’s a massive job and we’re throwing everything at it.

COP26, as the name suggests, places us a quarter of a century into the United Nations' process that was supposed to have delivered a solution to climate change. That I write this while unprecedented heating hits regions of the Pacific coast of North America, killing hundreds of people and forcing workers to labour in appalling conditions, demonstrates that the COP process itself has failed to deliver any solutions.

But what is COP? In order to gain greater insights I turned to this book by South African socialist, academic and activist Patrick Bond. Bond has been involved, and written about, many key social movements in South Africa, as well as the wider climate justice movement. His book Politics of Climate Justice is simultaneously a examination of COP and a study of the climate movement itself as it stood immediately before the Durban COP of November 2011. While this necessarily dates the book, the core arguments remain illuminating and are of great interest to activists confronting COP in Glasgow this year.

Bond argues that the COP process is both a battle ground between different national forces on the world stage, and a way of driving through a free market solution to environmental problems. Let's explore this a little. In 2009 President Obama destroyed the climate talks at Copenhagen, forcing through along with allies in Brazil, India and China, an Accord that made emissions reductions voluntary, based on pledges made by individual nations. It was a blow to those who argued that there had to be legally binding emissions reduction commitments, but it was also a blow to those who saw environmental issues as being solved by free-market mechanisms.

Bond explains that the following year, at the COP in Cancun, the UNFCC head Christiana Figures and Mexican leaders,

made skilled manoeuvres in a context of diplomatic desperation. But they allowed financiers, industrial capitalists, fossil fuel corporations and states to cement in the kinds of capitalist-crisis climate strategies that will make real solutions that much harder to achieve.

In Copenhagen in 2009, the misnamed 'bottom-up' strategy of emissions-cut 'pledge and review' was introduced by Washington. The Durban COP17 is a showdown for those who would try to retain at least some of the Kyoto residue, for example the varieties of carbon trading and offset mechanisms that are threatened if the entire treaty is simply ditched in favour of the Copenhagen Accord.

COP is thus limited because it is a plaything of international politics, and is at the mercy of the more powerful economies and their allies. As Bond points out

Nothing that occurred in Cancun reflected a diversion from the Franco-American agenda of Kyoto sabotage. Even better for Washington and Paris, Japan also signed on. Political choices of this sort, made by Obama, Clinton and their allies and underlings have a great deal to do with why Washington's domestic gridlock was repeated at global scale, via the Copenhagen Accord, and why at the same time, the paralysed elites must continue to have faith in carbon trading, not matter how many incidents of market failure and apparently ingrained emissions-trade corruption are uncovered.

Bond concludes, "any global negotiations aimed at a fair, ambitious and binding deal are obviously destined to fail under these circumstances".

While we are here, we should take a moment to emphasise something. Bond is not arguing that the choice we activists need to make is between Copenhagen or Kyoto. When it comes to carbon-trading Bond is devastating:

Instead of decisively displacing the crises by moving them around, the carbon markets have arisen to attack hundreds of billions of dollars in speculative trades; have been corrupted as vehicles to genuinely solve economic and climate crises; and have now sprung leaks so intimidating that even the US capitalist class has not found a way to patch up the idea of a market solution to a market problem.

Bond argues, following Rosa Luxemburg and David Harvey, that carbon trading is an extension of capitalisms continual need to expand into new regions to find new sources to fuel primitive accumulation. I wasn't particularly convinced of this theoretical framing. But it doesn't detract from his argument and it is certainly true that carbon markets are part of tying climate solutions to the ongoing accumulation of capital itself.

Counter to this dynamic are the social movements. Bond traces how the climate justice movement in South Africa as evolved linked and parallel to wider social movements - the anti-apartheid movement, the movement for access to AIDS drugs, protests against electricity price rises, water cut offs and land questions. He shows how sometimes the NGOs have actually been on the wrong side - because they side with "elite" solutions, and the importance of bottom up, mass movements to help shape the outcomes of COP and win wider social and environmental change. Bond argues that without movements that challenge "establishment strategies" the movement will not be able to win climate justice - in particular  getting the North to "repay the climate debt". He goes further though and says the movement needs to drive society "from a fossil fuel dependent capitalism to eco-socialism".

I've focused this review on the aspect of Patrick Bond's book that analyses the COP dynamics. I should acknowledge that there is also a wealth of detail here for those interested in the history and practice of movements in the Global South, particularly South Africa, around environmental issues and specific demands from those campaigns about historic climate debt. There are some fascinating and inspiring case studies about movements against polluting industries - demonstrating how the environmental crisis is very much experienced through class and racial lines. Patrick Bond finishes with an appeal that the movement develops international links and solidarity if we are to defeat fossil fuel capitalism - something that was as true in 2011 as it is in the run up to COP26 in 2021.

Posted by Resolute Reader at 5:42 pm