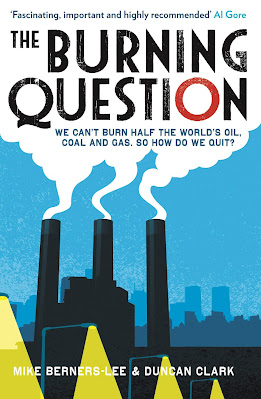 The The Burning Question begins by asking a really important question. Why is it that given awareness of climate change and nearly twenty-five United Nations annual conferences, carbon emissions continue to rise? The authors aim to "get a proper understanding of the core barriers that are holding us back" and to "show how the money bound up in oil, coal and gas reserves has blocked political progress and clouded the analysis". These are excellent questions and in the first section of the book the authors show, in graphic and sometimes alarming detail, why no progress has been made on climate change.
Part of the problem is, of course, the wealth and power of the fossil fuel corporations and the politicians who are linked to them. More worryingly however the authors show how, because of the centrality of fossil fuel to the economy, "efficiency and voluntary carbon cuts do have an essential role to play in bringing about a low-carbon world, it turns out that on closer inspection, they don't in themselves do much, if anything at all, to cut global emissions."
In fact, the figures are quite stark. It's worth quoting Berners-Lee and Clark at length:

A team of academics crunched a huge amount of trade data to work out the total carbon footprint of consumption in each major country, including imports and excluding exports... Between 1990 and 2008, developed countries as a whole cut their carbon emissions by 2 per cent, but their total carbon footprint in the same period actually grew by around 7 per cent. As expected, the rise was higher than average in the US, where climate policies have consistently met with strong political opposition, but even in climate-progressive Europe, the apparent 6 per cent cut in carbons emissions was slashed to become just 1 per cent.

To be clear, we are not saying alternative energy sources aren't important. It's obvious that phasing out fossil fuels will only be practically and politically possible in parallel with a monumental effort to scale-up low-carbon energy sources. But  in the absence of a major global effort to constrain fossil fuel use, it's not clear that low-carbon energy in itself is helpful.

Part of the problem is the age old Jevons paradox. In his 1865 book The Coal Question, William Stanley Jevons showed that energy efficiency in steam boilers led to increased coal use. Similarly energy efficiencies or cheaper sources of energy lead to increased usage of energy. Reducing the cost of car travel can lead to more miles driven. Another problem, highlighted by Berners-Lee and Clark, is the fact that capitalism is a system based on growth. Thus the problem lies within the system of production itself, not consumption.
The authors are excellent at highlighting the various reasons for this, and the limitations that there are in, for instance, environmental strategies that are simply about deploying efficiency savings or renewable capacity. These simply get gobbled up by the fossil fuel system. They also appreciate the limitations of international agreements like Kyoto which countries can simply pull out of if they are likely to miss their targets, or ignore if they want. They also know that solving climate change is such a massive threat to fossil fuel multinationals that they are prepared to "lobby against carbon laws and buy political support for their agenda."
Our authors also demolish the myth of technological solutions. We've seen the failure of efficiency savings to reduce carbon emissions. They also point out that (say) Carbon Capture Systems aren't working and, more importantly, won't be used because they hit profits:

Even if it cost nothing to install, no power station operating purely for profit would ever use CCS voluntarily as the carbon capture processes take huge amounts of energy, undermining the commercial viability of the planet.

And that's without discussing where we put all the sequestered carbon.
So what's the solution? Here is where my criticisms of the book come to the fore. The authors understand that the system doesn't work. But end up suggesting more of the same to solve the issue. So to make CCS viable we need laws to "create a market" for the systems. Another option looked at positively are emissions trading schemes:

A sensibly designed carbon-trade policy could incentivise foreign companies and governments to increase carbon regulation in their target markets and ensure that any carbon tax revenues are collected locally rather than overseas.

But existing schemes like these don't work, and its not because they aren't "sensibly designed" but because we live in a fossil fuel system that runs on the logic of profit.
Because they understand the power of the multinationals and the damage they cause, the authors are clear that action that challenges these fossil fuel monoliths is essential. This mean laws, boycotts and international agreements to force a transition to a low carbon society. Getting this change means ordinary people must protest, lobby and pressure governments to introduce legislation to reverse things. This is great. Who can disagree with the authors' statement that "if we accept that our green efforts are as much about creating social and political ripples as they are about directly stemming the flow of carbon into the atmosphere, that suggest we may need to think more about maximising those ripples". But what does this actually mean for Berners-Lee and Clark?

If an advertising executive declines a job to promote the Canadian tar sands, although another agency will take it up, the exchange might inspire some soul searching at the oil company and raise eyebrows in the media sector. If a student demands that a university divests from fossil fuels, although someone else will buy the shares, influential academics will be forced to think harder about the moral implications of oil, coal and gas production. Conversations will be triggered".

To think that people call revolutionary socialists utopian! Even in 2013 when the book was first written these were already inadequate arguments. Unfortunately ripples don't change the fundamental dynamics of capitalism. Herein lies the problem. The authors criticism of the behaviour of the fossil fuel companies which arises out of the nature of capitalism, but this criticism does not extend into a critic of the capitalist system itself. Ultimately the alternative posed in this book is a green capitalism which will, it seems, come about because large numbers of people "stand up for the facts". The authors' conclude:

Culture change and campaigning creates political space to change laws, which can build markets, which can scale technologies, which can feed back into culture change, enabling better laws, bigger markets and so on.

Rightly the authors argue we need a cap on carbon emissions. But that can only come about through a challenge to the system itself, and that requires more than appeals for something better. It means defeating and breaking up those massive oil, gas and coal corporations. It means organising society around something other than the drive to make profit.
Unfortunately the last two hundred years of capitalism prove beyond all doubt that the capitalists aren't swayed by morals or truth. They are only interested in profit. The fact that fossil fuels are so central to the system means that the system cannot be reformed, and this book demonstrates just how true that is. The problem is the authors don't take the argument to its logical conclusions. Thankfully the environmental movement of the 2020s is far more radical in its approach: "System Change not Climate Change".
Related Reviews
Malm - Corona, Climate, Chronic Emergency: War Communism in the 21st Century
Malm - Fossil Capital: The Rise of Steam Power and the Roots of Global Warming
Angus - Facing the Anthropocene: Fossil Capitalism and the crisis of the Earth System
Dawson - People's Power: Reclaiming the Energy Commons
Böhm & Dabhi (eds) - Upsetting the Offset, The Political Economy of Carbon Markets
Posted by Resolute Reader at 9:20 pm