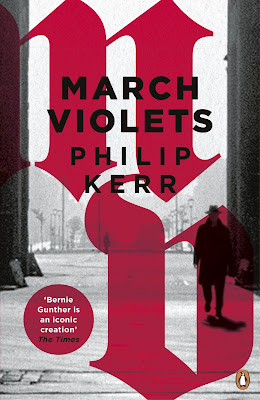 Many people have recommended Philip Kerr's Bernie Gunther detective novels to me. Most of them are set in Berlin during, or after, the Third Reich and they are acclaimed for historical accuracy and the transportation of Detective Noir from the United States to a completely different setting.

March Violets is the first of the trilogy that make up the Berlin Noir series. The Gunther novels proved popular enough that Kerr produced more of them. But the first three are the classics. March Violets is set in 1936, as Hitler is consolidating his power and the Nazi Reich has deposed of its opponents. Attacks on the Jews are yet to reach their height, as Hitler is still concerned about the watching world. Gunther tackles his case as the Berlin Olympics take place, and the regime hides its most outward examples of antisemitism.

Kerr's detective is investigating the loss of some diamonds - owned by the daughter of one of Germany's most wealthy, and least Nazi supporting, steal magnates. The daughter and her husband have been murdered, and Gunther is asked to find the diamonds. Quickly he finds that the case is much more complicated and there are links to senior Nazis, as well as organised crime.

Its a complicated plot worthy of a classic Noir novel. Gunther is wise-cracking, tough, alcoholic and cynical. He's also not a fan of the Nazis - though to be fair he doesn't really like anyone. Readers who enjoy the likes of Philip Marlowe will appreciate the work that the author has put into recreating the atmosphere and characters.

But. And it's a big but. Gunther is not Marlowe. For a start he's to misogynist and homophobic. Marlowe was a cynic, but he wasn't openly offensive. More problematically is how the book treats women. Women throw themselves at Gunther and the sex scenes are crude. The only female character of any depth, one that Gunther falls for, disappears at the end of the book. There is also, it must be said, a particularly unpleasant rape scene which is described in far too much detail. It's unnecessary, crude and soured the book for me.

At its best the book is a clever exploration of the way that the Nazis transformed the whole of German culture. I am not sure that it was quite as common as Gunther seems to imply that people spoke critically of Hitler and the Nazis, but by placing Gunther at the heart of the Nazi beast (and even in a Concentration Camp at one point) Kerr does manage to evoke an impression of Berlin in the late 1930s. But in this book at least, I found the negatives far outweighed the positives.

Posted by Resolute Reader at 8:15 pm