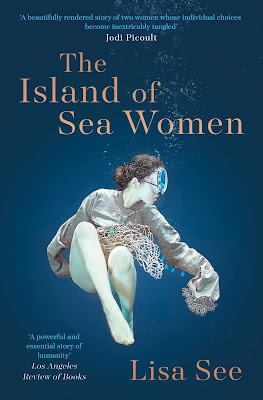 The Island of Sea Women is likely going to be the best work of fiction I read this year. Set on the tiny island of Jeju, the home of the famous female haenyeo divers, it ties a lovely story of friendship found and lost, together with the wider history of the island.

The haenyeo are specialist divers. The women dive deep to capture molluscs, octopus and other sea life, harvesting the sea bottom as though it was a farmers' orchard. Theirs is a matrilocal society - they are the main providers for their families with the men providing some childcare, and frequently being criticised for drinking and philosophising all day.

Young-sook tells the story, moving back and forth between the present and the past, telling the story of her life and her friendship with Mi-ja. The book opens when the two are very young, living on Jeju during the Japanese occupation of Korea. The girls become close friends, and learn the ropes of diving from Young-sook's mother who is an expert diver. We learn how the community organises, as the two girls grow up - eventually becoming talented divers themselves.

As the war ends, the Japanese occupiers leave, and those who have collaborated are first reviled, then adopted by the new US occupiers. The Korean government, allied with the US, becomes a powerful anti-communist counter to the USSR, which is occupying the North. Anti-communism isn't just about the enemy to the North, it is also about destroying the left and democratic movements at home. The centre piece of the story is the April 3rd incident on Jeju, when a mass democracy protest demanding Korean unity, saw police open fire with many protesters killed. This sparked a guerrilla uprising, which sees the South Korean government use increasingly repressive collective punishment against anyone seen as supporting the uprising.

Young-sook is one step removed from these struggles, though the government's war doesn't leave her and her village alone. The central incident, which I won't describe here for fear of spoiling other's reads, shatters her friendship with Mi-ja, and leads to a lifetime of recrimination.

In the present, as Young-sook is a grandmother and meets visitors who knew Mi-ja, she reflects on what happened, retelling the story for the reader and a shocking revelation.

In many ways this is a novel with three stories - the relationship between our two main characters, distorted and shaped by wider forces and conflicts, the story of the haenyeo and a culture threatened by the arrival of modern technology, industrialisation and tourism and the story of the South and North Korea. The skill of the author is two-fold, the way she links these three strands together and the deep research that is the basis for the book.

Deeply moving, highly readable and an insight into a history and culture I knew little about, I highly recommend this wonderful novel.

Posted by Resolute Reader at 9:56 pm

I've seen this around but didn't really know what it was about. I'm intrigued now - thanks.