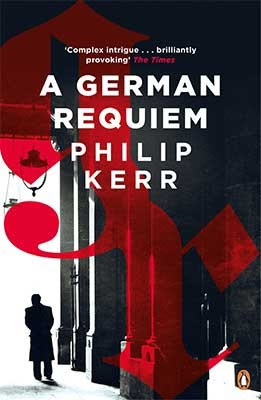 After finding the first two volumes of Philip Kerr's Berlin Noir trilogy unsatisfactory and unpleasant, I was intent on reading the third volume A German Requiem merely for the sake of completion. It is, in my mind, better - perhaps because it doesn't deal with the claustrophobic atmosphere of Berlin during the Nazi era. The war is now over, Bernie Gunther has finished his stint on the Eastern Front (after a brief period in the SS where he witnessed many atrocities) and time in a Soviet POW camp. He is now eking out a living in the ruins of Berlin, where he and his wife survive mostly because she is receiving presents from a US Army Officer that she is having an affair with.

Gunther is earning a few coins after returning to his old line of work. But Berlin in 1948 is a tense place as the Russians and Western Allies begin to square off. After being approached by a Russian officer apparently on behalf of an old acquaintance, Gunther travels to Vienna to try and solve a crime and get an innocent man off Death Row. In Vienna, Gunther escapes his wife's infidelity, and gets sucked into a vortex of crime linked to the black market and former Nazis.

A German Requiem doesn't quite fit with the Berlin Noir title - being almost entirely set in Austria. That said, Kerr does show the vast difference between the two capitals, though both are being pulled apart by the conflicts of the various occupying powers. Vienna is back on its feet much quicker, there's less damage and, as Gunther quickly learns, despite the involvement of many of its citizens in the Nazi era's crimes - the Western Allies are happy to imply that Austria was an unwilling participant in Hitler's Reich.

Much of the novel is focused on Gunther's attempts to find out what happened when his acquaintance was linked to the murder of a US army officer. But the real story centres on former senior Nazis who are being used by the Americans. Here Kerr is on firm historical ground, and he (and Gunther) are suitably cynical about the way that some Nazis are found guilty and executed and others are given new identities and jobs.

Vienna forms the backdrop, and as a neat joke, Gunther finds himself present at a couple of events linked to the filming of The Third Man, the classic film noir set after World War Two in similar circumstances. The novel is less misogynist than the previous one - women are less likely to throw themselves at Gunther as soon as they see him. Though there is at least one such scene. There is also a rather gruesome killing of a female character.

Finishing the last of the trilogy I was left conflicted. I enjoyed them for their evocation of the Nazi era. Something Kerr excels at. He also writes a good Noir mystery. But I was left unhappy with his depiction and use of female characters. In his regard, the final novel is at least better than the first two. I remain unsure as to whether I'll return to Gunther's adventures as a result.

Posted by Resolute Reader at 8:49 pm