Graham Farmelo - It Must Be Beautiful: Great Equations of Modern Science 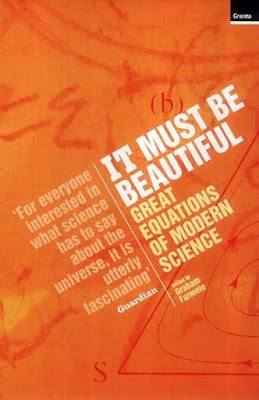 At first glace this seems like a rather strange collection. How can one judge scientific equations on the basis of beauty? Surely their importance should be based on how they allow us insights into the universe? In his introduction Graham Farmelo argues that the authors have "looked at whichever aspects of their equations... [giving] unique personal meditations on some of the seminal equations of modern science, equations that through their concision, power and fundamental simplicity can be regarded as some of the most beautiful poetry of the twentieth century".

Having read the book I remain unconvinced. But let's look at some of the equations themselves. Many of these are equations from the world of physics, and despite Farmelo promising us that most of the authors eschew the "eye-watering mathematical details", there is plenty of maths for the reader to grapple with. Roger Penrose's chapter on Einstein's equation of General Relativity, for instance, will be a major challenge for readers who don't have recent engagement with mathematics or physics.

One strength of the book is that all the chapters show how almost all of these great equations were arrived at out of the interaction between scientists, thinkers and the wider academic community. In fact, as Christine Sutton points out in her challenging chapter on The Yang-Mills equation, the fact that some scientists weren't aware of similar work hampered their own insights. But she explains:

No scientist, in recent history more than any time before, works in complete isolation. Moreover, there is often a sense in which scientific progress and discovers are of their time. Yang and Mills may have been ahead of their time in that it took nearly two decades for their belief in a basic principle to bear fruit, but they were also of their time.

Unfortunately neither Sutton nor her fellow authors in this collection develop this insight further. For most of the authors scientific advance is really the interaction of individual thinkers, not wider society. The only real exception to this is the work covered in the chapters on quantum physics and general relativity, where the race for the atom bomb hangs heavy over the scene. But even here I felt the discussion was abstracted to far from the wider social developments fuelling research.

That said, we cannot neglect the debates and scientific interactions. Farmelo's own chapter on The Planck-Einstein Equation for the Energy of a Quantum brilliantly describes the transformation in physics that took place in the early decades of the twentieth century. He calls it a "revolution with no revolutionaries" but there still is precious little on the wider social context.

A second strength of the book is that it doesn't focus just on the obvious equations of maths and physics. In fact, as a maths and physics graduate, I was most stimulated by chapters that dealt with wider subjects. Oliver Morton's chapter on the Drake equation is an excellent discussion of how scientists have grappled with the number of potential civilisations in the universe. Aislin Irwin's chapter on the equations behind CFC destruction of the Ozone layer is really good, and has much to tell us about science and environmental issues. But here to it failed to get to grips with how this ecological crisis was solved - readers could be left thinking it was all about scientists. The chapter neglects the battles with companies like Dupont to switch manufacturing to non-CFC products. However my favourite chapter was that by Robert May on the Logistic Map, a fascinating discussion about maths, Chaos Theory and animal population growth.

Ultimately I don't think the book managed to justify its title. All these chapters are interesting (though some are hard work) and the insights they give to the relevant science and the scientists make the read well worthwhile. But I am not sure any of them can be described as poetry or beautiful. As groupings of numbers and symbols, what they represent - the evolution of species, the rise and fall of populations, the way that gravity is distortions of space-time - may well be beautiful, inspiring or exciting. But the equations themselves aren't and I think the various authors who try and convince the reader of this, fail to do so.

Perhaps the problem is best summed up by Steven Weinberg's very disappointing afterword. We are promised an essay on "How Great Equations Survive", which spends most of its time looking at how science has used Dirac's equation. At the end he concludes, "When an equation is as successful as Dirac's it is never imply a mistake.... We must continually be open to reinterpretations of these equations. But the great equations of modern physics are a permanent part of scientific knowledge, which may outlast even the beautiful cathedrals of earlier ages." But this abstracts equations from the society that produces them, and the understandings we gain from them. It turns equations into things that can be written in books, not tools to investigate our universe - and renders the science meaningless.

Angus - A Redder Shade of Green: Intersections of Science and Socialism
Saini - Superior: The Return of Race Science
Levins & Lewontin - The Dialectical Biologist
Engels - Dialectics of Nature
Miller - Empire of the Stars

Posted by Resolute Reader at 9:03 pm

Email ThisBlogThis!Share to TwitterShare to FacebookShare to Pinterest
Labels: 1917, science