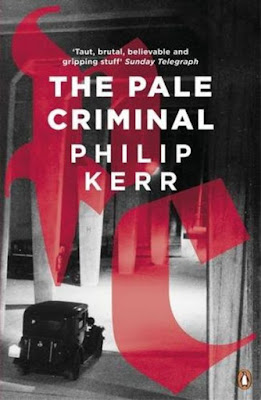 Volume two of the Berlin Noir trilogy featuring Philip Kerr's detective Bernie Gunther is similar to the first. While women still, improbably and repeatedly, throw themselves at Gunther, the plot is refreshingly different. Gunther is hired to find out who is blackmailing the gay son of a rich publishing house owner. Seemingly unrelated to this, Gunther is pulled into investigating a serial killer who appears to be targeting young, blond school girls. The Gestapo have found an innocent Jew to pin the blame on, as the method of murder is similar to an anti-Semitic trope being regularly used by a Nazi newspaper - Der Stürmer.

Gunther is reluctantly brought back into the German police force by no less a figure than Reinhard Heydrich. With the powers that he has from this he tries to find the serial killer before the general public learn of the killings. As with the first novel Kerr tells us a great deal about Berlin in 1938 - the racism, paranoia, violence and increasingly militarised society through Gunther's experiences. The backdrop to the novel is the Sudeten Crisis and the Munich Agreement. Gunther's convinced there will be war, most others are not. The tension filters through all the characters.

The plot is complex, and gruesome. Kerr has depicted police procedural methods from the 1930s with seeming accuracy. However irrational the Nazi regime was, the solution to the murders and the ending of the novel are somewhat unbelievable. As is the way that Kerr ties up a lose end from the first book in a very unsatisfying way. The book is readable, enjoyable even, for the atmosphere if not the plot. Except...

In my review of the March Violets I expressed my concern at a deeply unpleasant and unnecessary described rape scene. The Pale Criminal doesn't have this, but there is a extremely unnecessary scene involving a young sixteen year old girl who arrives at Gunther's apartment to collect money for Winter Relief. There's an uncomfortable scene between her, and Gunther - who while he rejects her advances, there is too much salacious detail. This left me wondering quite how Kerr thought women behaved and why he felt he needed to include these scenes.

Posted by Resolute Reader at 8:31 pm